The World According To Denny 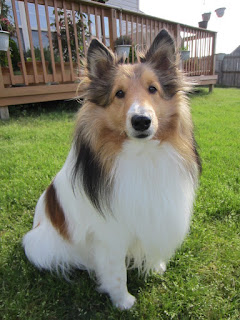 You know - most people's and the BIG DOG think I am just a "weird scared little dude" and YES - they are right BUT I also have another side to me - the mischievous side but don't tell anyone okay - I like to blame it all on that "somedoggy" that hangs around blogville and gets us all in trouble.

So what is it that "somedoggy" gets up to?  Well it appears he LOVES to wait until the peeps have gone to bed and then he goes and empties out the trash can all over the living room rug. Luckily it just is one Mom keeps near her chair for while she is crafting so it is mainly just bits of paper and stuff but SOMETIMES there is a tasty wrapper of some kind in it - or even tissues!!!  Those require VERY thorough shredding into like 87 gazillion tiny pieces that the Mom has to pick up.  Now Mom usually puts the trash can out of reach each night - but she is OLD and sometimes she forget - and "somedoggy" is ALWAYS waiting.

"Somedoggy" also LOVES to steals MY Dad's underwear and takes them outside! Now in all fairness it is Dads fault and he often misses when he throws them into the hamper and they end up on the floor - so what is "somedoggy" supposed to do - but pick them up - right. Mom has lost count of the number of times she has found them outside - usually wet and soggy from the morning dew on the grass. The funniest of all when she found a pair one cold frosty morning and they were frozen flat!!!!

Some doggy also likes it when Dad comes home and takes off his work shoes - somedoggy sticks his head inside them and snuffles and snorts and makes funny noises in them. He has been known to leave the odd bit of kibble in them too.

Somedoggy as also decided he is not fond of the vacuum cleaner and has to tell it off SEVERELY every time it makes an appearance.

And finally - somedoggy is quite an apt gardener and loves to prune Moms potted plants. He is very nimble and just takes the ends off all the branches! Yes - that somedoggy has a mischievous side!