It's just not fair ! 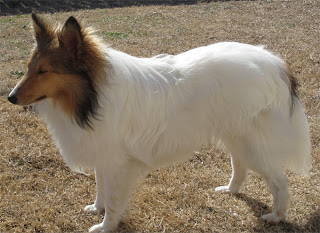 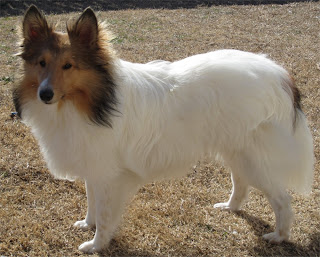 Well Weilly has an excuse for not playing - see Mommy took him to the vets yesterday about his limping, he has something called arty-rife-tuss in his front right leg and also in his back left leg. The vet thinks his front leg was caused from doing agility - and that because he has been limping on it for quite some time on and off over the years he has put extra pressure on his back leg to compensate and now that one is hurting him too. Mommy was very sad as she was always so careful about his agility and never did a lot with him so she is surprised this has happened. But Wielly is much bigger then a normal sheltie and being white could also have something to do with it. Mommy says the Vet pulled Wielly's legs this way and that - and said Weilly is a very stoic doggy as he didn't make a sound the whole time. In fact the only way he knew Weilly felt any thing was when Wielly held his breath instead of panting. He also said Weilly wasn't allowed to go walkies for two whole weeks! Poor Weilly! He has some medicines to take every day now and hopefully that will help him feel better.

Now as for Jackie - his Mommy is being so mean - they don't get up until nearly 9.00am even though I wake up at 6.00 and want to play and then she keeps him in her room with him ALL afternoon even though I cry and cry at the door for him to come out. And she gets upset at me because I won't go to her and let her pat me - why would I????? She might grab me and lock me up in the room too !!! Jackie is MY buddy and I want him to be able to play with me all day long. It's just not fair!

Posted by Cowspotdog at 3:39 PM