The proof is in the bedding! 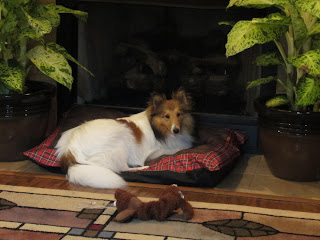 Some of you may remember that Mom bought the 'Wuzster' a new bed for Christmas but that he was too scared to get on it or even go near it. In fact he spent the first couple of days barking at it and finally just ignored it hoping that the 'evil' bed would go away. Well last night for the first time EVER the 'Wuzster' actually decided to have a snooze on it. Mom thinks it is because 'IT' has been snoozing on it and it now smells like him. 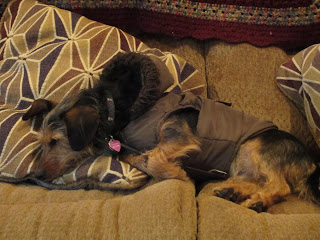 This of coarse meant that 'IT' had no where to snooze so he just dragged one of the couch cushions to the middle of the couch, stomped it around a little to make it just right and then went to sleep on it. Mom was chuckling and thought of Mr Pip's Occupy the couch campaign. 'IT' made himself very comfortable right in the middle of the big couch declaring 'this is my spot'. As for me, I was by my FAVORITE spot by the front door acting a draft stopper - that cool air sneaking in is soooooo nice. Okay...I am off now to have serious barkings with those two young whipper snappers about HOGGING my blog!

Posted by Cowspotdog at 7:55 AM