A visit to Jacksonport 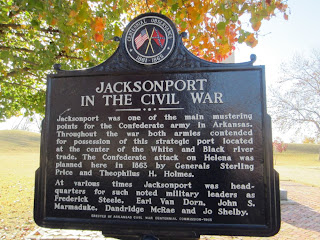 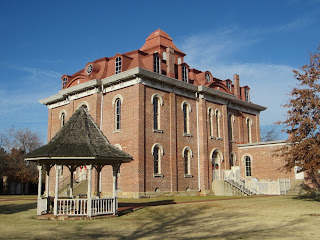 We went on an adventure today when Mom and Dad decided to try out the new car on the highway. They found a new park for us to visit called Jacksonport State Park - it is about 40 minutes away from where we live and they took all of us. Of coarse Dweeb #1 (Jackson) was convinced it was HIS park because it was named after him.  Stupid Dweeb - doesn't he know ALL parks are MINE - no matter what the name is. Now Jacksonport use to be a thriving city at one time with a population over 25,000 but these days the population is only 2,500. It is the meeting point for the White River, the Black River and they flow into the Jacksonport River which eventually joins the mighty Mississippi. This was a very strategic place at one time as it was where all the big paddle steamers unloaded and put goods onto the smaller paddle steamers so they could go further upstream.

This was also a very important place during the civil war and that is when the population basically started it's decline as so many of the people died during the battles over this city.  Mom loved the old court house and it is pretty neat the way they had done the roof. 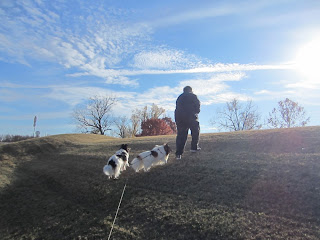 Around the town there are also huge levees which were all hand built to protect the the town from flooding. We had to climb up over them to reach the river. Dweeb #1 flew over the top pulling Dad along with him and me and Dweeb #2 (Denny) we helped pull Mom up over the levee.

Once we reached the top we could see where all the rivers meet. It looks kind of calm but it was really flowing quite fast. we saw lots of fish in the water too. Here was Mom and all of us and you can the rivers behind us. 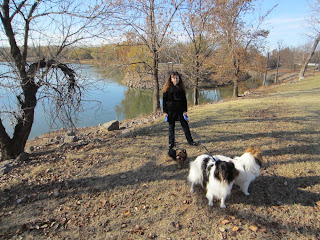 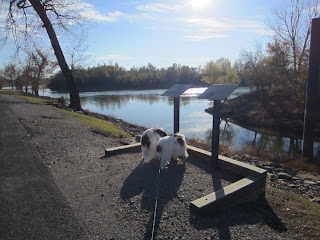 We had the best time walking the entire length of the park and it was wonderful - there were so many new smells and we were the only ones there so we hard the whole park to ourselves. On the way back we stopped by this old civil war canon. Mom said it was the perfect as there was hooks to hang our leads on. All and all - it was the perfect way to spend a Sunday and I must say I enjoyed MY new park so much. 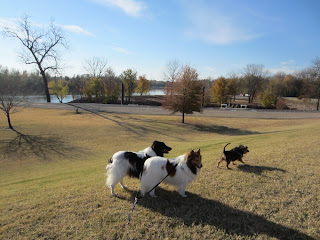 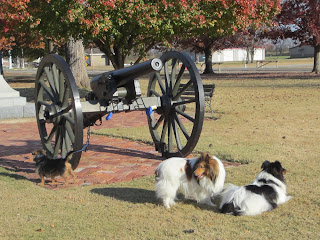 Posted by Cowspotdog at 7:10 PM