What The Dog - is what I say. As if being left at home wasn't bad enough - can you believe Mom didn't bring a back a single treat!!!!!  Oh yeah - she says she went in all the 'boutique dog stores' "Doglishious" "Dogology" "Puppy Power" and such but they mainly had clothes (mostly pink) and very generic treats and toys the kind she won't buy for us. One store didn't even know what bully sticks were when she asked if they had any!!!!   Dogology in Fredricksberg -  had doggie strollers that you could rent by the hour ($25) for when you poochie got tired of walking and you could have you photo taken by them with your dog in front of a cowboy scene for $125!!!

As if getting no treats wasn't bad enough -  she then had the nerve to tell me that the hotel they stayed at ( a Hilton Garden Inn ) allowed doggies!!!  She said it cost an extra $75 a night to have a doggie there but it didn't seem to stop people as she counted at least 20 doggies and most people had 2 dogs with them.  Admitted they were mainly chihuahuas and small breed dogs although there were two beagles in matching green coats there. 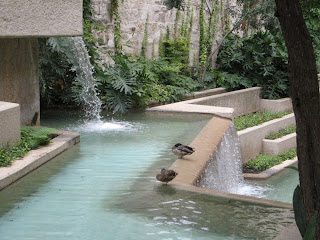 It gets worse though - cause then she told me how they went for a walk along the River Walk in San Antonio and about all the dogies she met and PATTED along the way.  W.T.D. MOM!!!! Mom said she loved the River Walk although she says would be a bit worried when it is really busy as someone could easily knock you into the river.  She thought it was funny to see the restaurants had provided blankets for everyone who wanted to sit outside because it was sooooooo cold - (67 degrees). 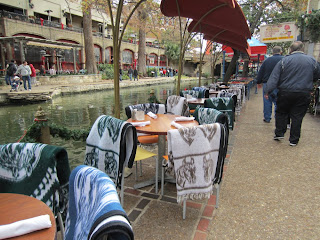 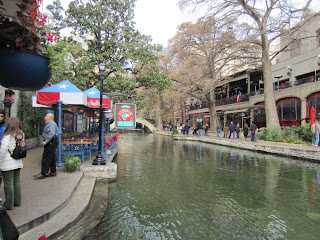