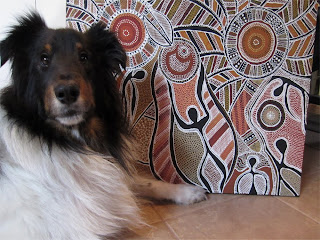 Yes! The Mom did and I am so proud of her - her first painting in  nearly three years.  Mom says it was a bit like riding a bike - you never forget but you are bit wobbly when you first get back on :)  I have never been on one of those bike things so I guess I will take her word for it.  Remember you can click on the pictures to see them bigger. Now of coarse there is a story that goes with the painting but the painting itself also tells the story. 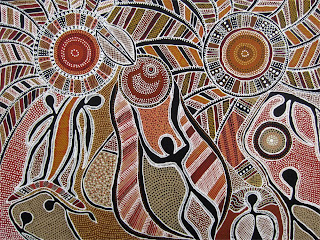 You see the 2 suns - they represent the dawn and dusk, then of coarse there is the kookaburra in the middle laughing because he enjoying the sunshine so much. The spirits are shown pushing the sky up to let the light in. The painting contains only 7 colors which represent the colors of the Australia desert. Mom has already started the next one so stay tuned for an update on that.  Here is the dreamtime story about why the kookaburra laughs.


Why The Kookaburra laughs
Long, long ago in the Dreamtime the earth was dark. There was no light. A huge grey blanket of clouds kept the light and the warmth out. It was very cold and very black. This great grey mass of cloud was very low- so low the animals had to crawl around. The Emu's neck was bent almost to the ground; the Kangaroo couldn't hop, and none of the birds could fly higher than several feet in the air. Only the Snakes were happy because they, of all the animals, lived close to the ground.


Eventually, the birds decided they'd had enough. They called a meeting of all the animals. The Kookaburras had a plan: we will gather sticks and push the sky up! All the animals agreed it was a good idea, and they set about gathering sticks. The Kookaburras, Magpies and other birds each took a big stick each, and began to push at the sky.

The Emus and the Kangaroos, the Wombats and the Goannas sat and watched as the birds pushed the sky slowly upwards. They used the sticks as levers, first resting the sky on low boulders, then on small hills. As the animals watched the birds pushing and straining the sky reached the top of a small mountain. It was still very dark, but at least the Emu could straighten up, and the Kangaroo was able to move in long proud hops. The birds kept pushing the sky higher and higher, until they reached the highest mountain in the whole land. Then with a mighty heave, they gave the sky one last push! The sky shot up into the air, and as it rose it split open and a huge flood of warmth and light poured through on to the land below. The animals wondered at the light and warmth, but more at the incredible brightly painted beauty of the Sun-Woman. The whole sky was awash with beautiful reds and yellows. It was the first sunrise.

Overjoyed with the beauty, the light and the warmth, the Kookaburra laughed with joy. As their loud laughter carried across the land, the Sun-Woman rose slowly, and began her journey towards the west. Now each morning when the Sun-Woman wakes in her camp, she lights the bark torch that she will carry across the sky each day. It is this torch that provides the first light of dawn. To celebrate this wonderful event and to wake everyone up to see it – the kookaburra greets the Sun-Women each dawn with his loud laugh and that is what we still hear today.

Posted by Cowspotdog at 5:27 PM