A visitor and good news 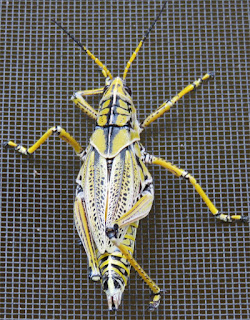 There we were sitting out in the sun room when we heard a loud chirping noise - we looked up to see this big guy on the fly screen - he was HUGE - nearly 3" long! Now check out his pretty colors and spots!

We did have good news at the vets - it is only the top of my tooth missing and no root is visible so he is going to leave it alone for the time being and look at removing it when I have my next teeth cleaning.

We just can't get a break it seems. Mr Reilly is back to the vets tomorrow after we noticed he has broken a front tooth (one of the small ones right on the front between the large canines). His foot still continues to bleed a tiny bit each day - he has another week to go and if it doesn't stop by then - he will be back a splint. We sure wish things would get back to normal. 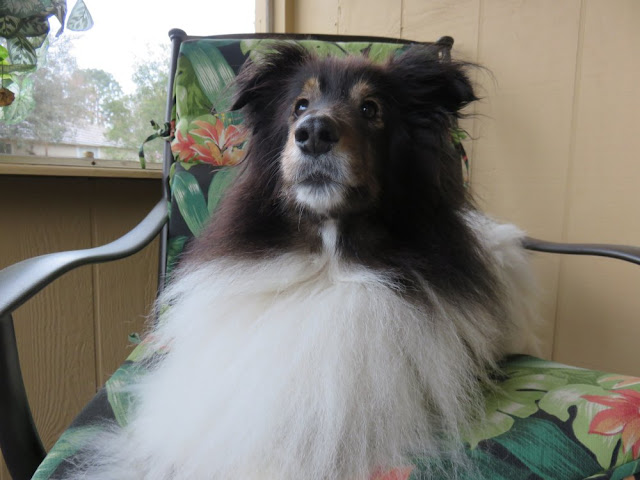 Guess what we did this morning

We were up bright and early to watch the sun rise and we got to do some bark ranger patrolling ! Happy Dogs !!!! 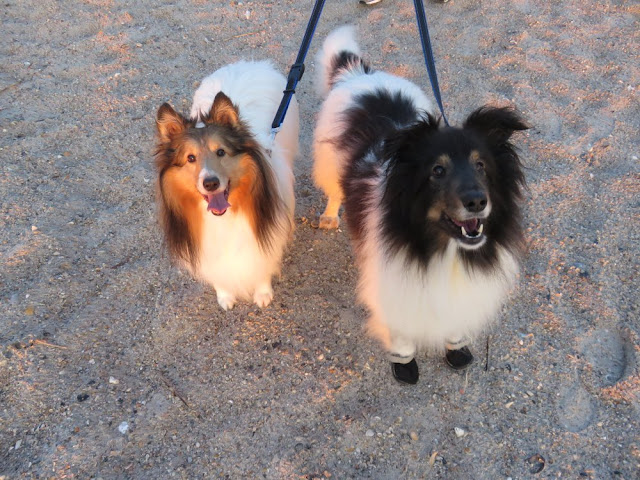 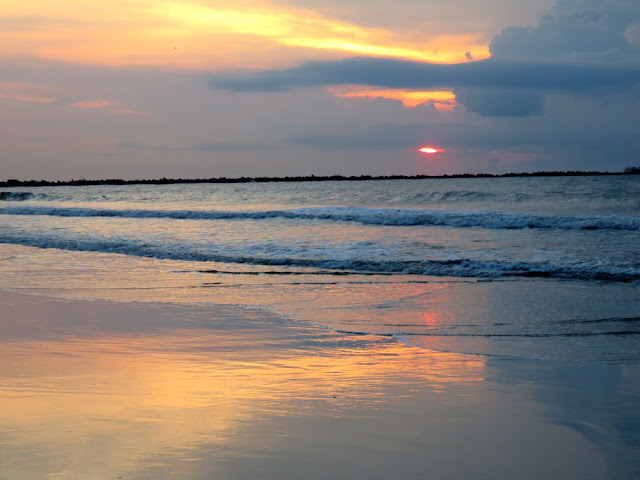 In the early morning I am loving being able to spend more time outside in my yard - it feels like I have on house arrest forever with this silly foot problem - but now Mom is letting me have a little more freedom. Last night I even got to walk to the end on my street and back (which is only four houses long) - it sure felt good to be able to sniff and check peep mail. 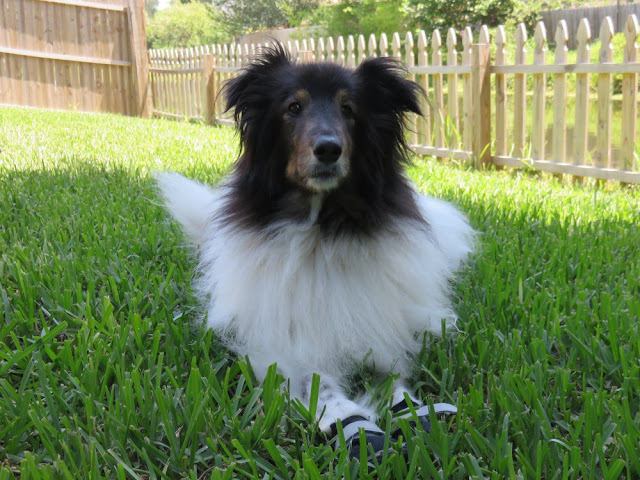 The on going foot saga

We went to see my surgeon vet yesterday and although he is happy with my foot - there is still a small area about half an inch long that isn't healed and still bleeding a tiny bit. He said if it doesn't heal by itself in the next 2 weeks that I will have to wear a splint again to take the pressure off the pad. The AWESOME news though - he did say I could try a few short walks !!!!!! Sadly - like many places around the USA we too are in the high 90's for the next week or so and even the early mornings are still hot for us long haired shaggy types. We did stop in the nice air conditioned pet store on the way home and it was SOOOOOO good to be able to sniff around and say hello (very loudly) to everyone. And YES - Mom bought ME lots of treats too :) 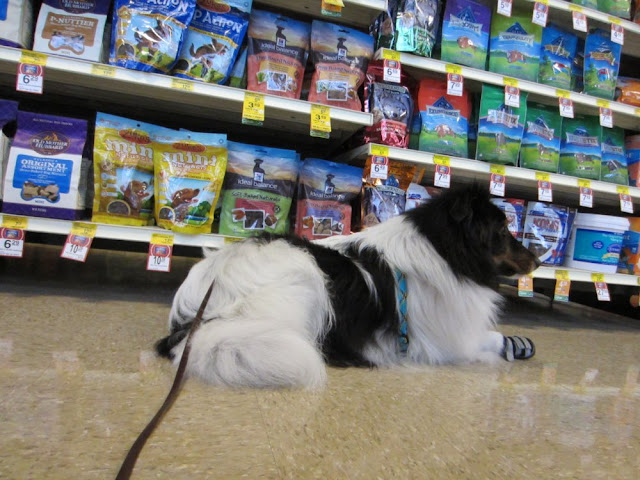 In other news - we must apologize for not being around this week - the Mom has been battling with a Lupus flare-up the last few weeks and is back on immune suppressants which has lowered her ability to fight off germies ........so of coarse she went and got herself a summer cold and has been feeling pretty yucky for the past week. She is starting to feel better so maybe this weekend we can go for an early morning beach walk.
Posted by Cowspotdog at 5:30 AM 26 comments: 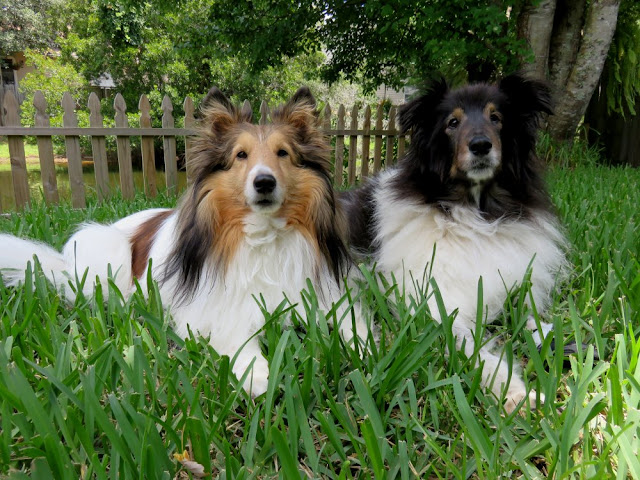 Mr Reilly went for his bandage change this morning and his surgeon was so happy with how his foot has healed this past week that they decided to give him try without the splint. His leg and foot is pretty weak from not being used all these weeks so he is still hobbling around but now he only has to wear his orthopedic boot. He will still need to have twice daily foot washes and antibiotics put on it and he still on house arrest for a couple more weeks but hopefully he will start building some muscle mass back and get use to walking on his foot again. We just have to be super careful that he doesn't put to much pressure on the scar tissue and we have added extra padding to his boots to help cushion his foot more. 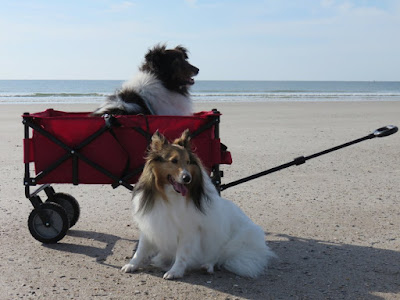 We got up early this morning and we headed off to the beach - it is not as much fun as running, galumphing and sniffing but it sure felt good to be out of the house. We really haven't been doing much lately as it has been in the 90's now for the last 3 weeks - even when we had the storm go through it didn't cool down. Mom too is still struggling to walk - she had been going to the Chiropractor and that is helping but it is a just slow recovery for her. We all miss the beach terribly and our daily walks but we are all hoping in a few more weeks that things will get back to normal.

We survived the storm 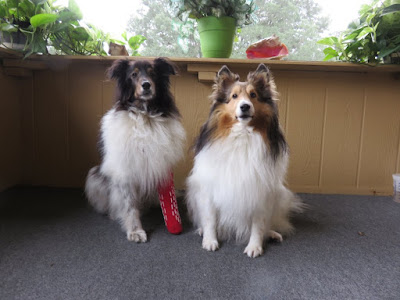 We are happy to woof that we survived Tropical Storm Colin - in fact we didn't even notice it as it went over us over night and we just got LOTS and LOTS of rain.

Of coarse everything is now soggy and wet -including us whenever we go outside.  Unfortunately our back yard looks a bit like a jungle at the moment as Mom hasn't been able to get out and mow it for the last couple of weeks. See we have a secret about a certain "pain in the butt" issue concerning the Mom. While on vacation on Sanibel Island Mom was constantly kneeling or squatting down to pick up shells and somehow seems to have severely irritated or strained the nerves/muscles/tendons/ligaments (the doctors can't to seem to figure out exactly which)  in her right hip and butt.  The pain got so bad she even ended up in ER over the weekend and she couldn't walk. They told Mom it could take 6-8 weeks to heal so both Mom and I are kind of hobbling around now - and check out my red sock - it is actually one of those non slip socks they give you in hospital (they gave them Mom) and she found it is perfect for me around the house and stops my foot sliding on our tile floors. I also have a special boot that Mom puts on when I go outside that is water proof. Oh - the Dweeb (Denny) says hi too - he says he has been feeling a little left out lately :)

Just as a side note - We know a few of you have also been concerned that I may have to have my foot amputated if it continues to not heal - my Vet says this is NOT going to happen and in the worse case scenario I may just lose a toe but after yesterdays visit he is much more optimistic that it will heal fine - it is just going to take some time.
Posted by Cowspotdog at 10:25 AM 25 comments:

We are just back from our surgeon vet and have some good news and bad news. The bad news is cultures came back on the infection and Mr Reilly has Pseudomonas in his paw. This is one of the worse bacteria's and very difficult to treat requiring daily antibiotic injections which can be very harmful to the kidneys.

After looking at the wound though our surgeon has decided to wait on the antibiotics as the splint to keep his toes together is working and the actual wound is healing by itself and there is just a small portion open now. It is still oozing a little but not very much and the surgeon is hoping he can fight off this Pseudomonas by himself.

Part of the big problem we have with his healing - apart from the infections is due to Mr Reilly's splayed arthritic toes - being spread out so much  puts a lot more pressure on the wound than he would have with a normal paw. As a result he will need to wear a splint for a few more weeks and then to a pressure bandage to keep his toes together until the scar tissue is strong enough to hold.

Today we are all watching the weather as Tropical Storm Colin is heading straight towards us - they say we can expect 6-8 inches of rain and winds gusting above 50 mph with possible tornadoes. We have had a bit of rain and a water spout was spotted on Jax Beach this morning but the worse of it is expected later tonight and tomorrow. Please keep your paws crossed for us :)
Posted by Cowspotdog at 11:13 AM 32 comments:

Every time we take we the ferry across the St John's river we see this beautiful old majestic ship sitting across at the dock and have often wondered about it. Well today Mom did some research on it after looking up its name and found out some amazing information.

The Atlantis II, which helped find the Titanic at the bottom of the North Atlantic Ocean, has been moored in the St. Johns River for about 18 months at the St. Johns Boat Co. across from Mayport. The Atlantis II was originally used as a research vessel when it was owned by Woods Hole Oceanographic Institution in Massachusetts. The ship's claim to fame came in 1986, when the vessel took part in an expedition that ended with the video images of the wreckage of the Titanic on the ocean floor. The Atlantis II transported a three-person submarine, the Alvin, to the Titanic wreckage site. The submersible was launched from Atlantis II to record the Titanic images about a year after it was initially discovered by explorer Bob Ballard. The ship is also noted for other historical hallmarks. "She's done many other things in her career that no other ship had done. She sailed 8,135 days [in a row] at sea and every ocean in the world, both north and south poles. If it's on the face of this planet and it's got water, she's been there." There are 7 decks and 32 State rooms on board. She is 210 feet long and was built at the Maryland Shipyards in 1962. In 2009 she underwent an 18 month refit costing $3 million dollars - the ship has been up for sale ever since then. 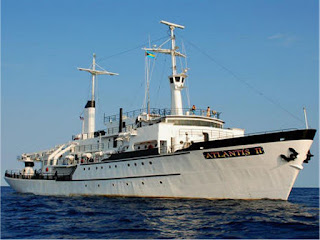 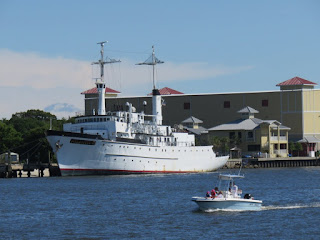