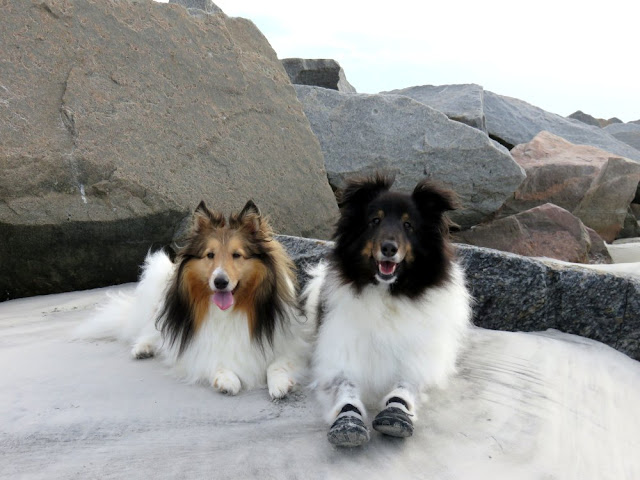 It has been a busy shipping week - here are some of the ships that we saw from our vantage point on the breakwater. Most of them we have seen previously but a couple were new. Mom is a member of VesselFinder.com and uploads pictures of all the ships and records the information about date and time where they were seen and their location.

The Cowspot Cats of Mayport

Personally I seen NO resemblance at all to these C.A.T.S but for some odd reason Mom always calls them Cowspot Cats. She always enjoys seeing them sunning themselves on the rocks of the breakwater. These are all feral cats but trust us - they are living the high life, they are fed fresh fish, shrimp and crabs everyday and every weekend we see one particular lady leaving big trays of dry cat food out for them. There is even bowls of water for them at the picnic pavilions. We have counted 7 cowspot cats and about 9 that are just black with white feet.  What annoys me is Mom won't let me go and chase them say hello to them - I just want to be friendly after all :) 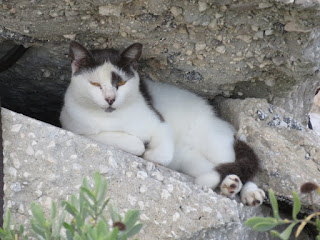 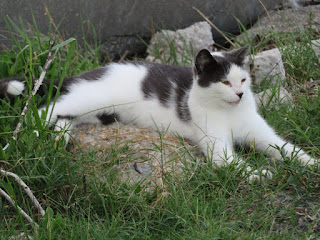 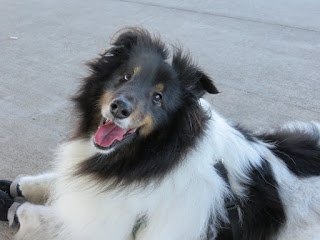 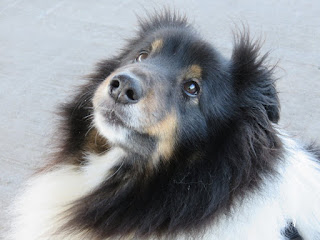 Last night we went for our evening beach walkies and it was still pretty warm so while mom was shell hunting we found some shade in amongst the breakwater the rocks. Mom did actually get a really good pic of the Dweeb - most unusual - he normally closes his eyes or looks everywhere but at the camera. As we watching.......... Mom suddenly spied something in the sand and the next thing we know she is but squealing in delight - she hit the jackpot - a giant Shark Eye Moon Shell that didn't have any damage on it at all - Mom couldn't believe it - personally we don't know what all the fuss was about - it wasn't edible after all or stinky! 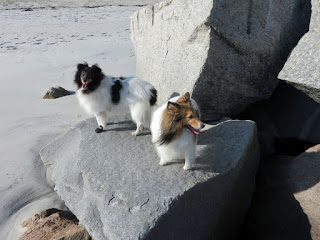 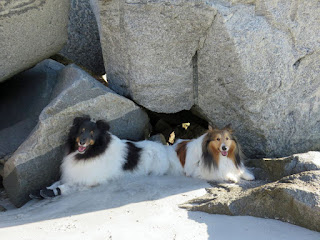 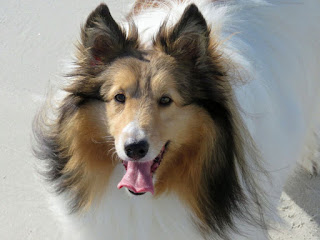 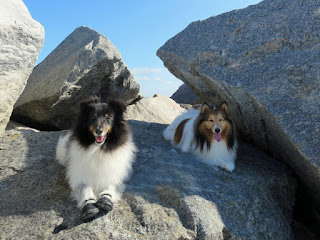 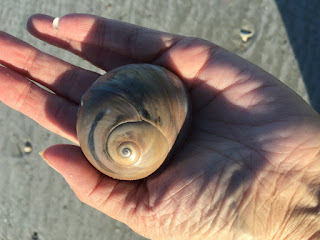 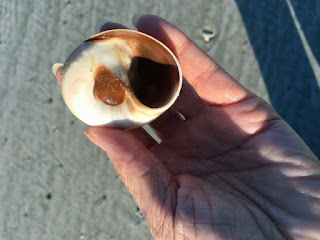 Maisy and The Helicopter

With all our excitement about helping to get the turtle rescued we didn't really get to tell you about Maisy. Maisy and her Mom came over and asked if it would okay to meet and of coarse we said yes. Maisy's Mom had a collie dog some years ago  - she thought we were small collies and we had to point out we are not collies at all but shelties. Maisy is 8 years old and was such a sweetie pie - we walked up and down the beach with her while the Mom's talked - (mom was so happy and hardly anyone ever stops to chat).

Maisy' Mom told our Mom what Jacksonville use to be like 20 years ago and how there use to be so many shells back then - she even remembers them building pyramids of conch shells on the beach at St Augustine and you could buy one for 50 cents!  To buy one if the store on Jacksonville beach - it will cost between $20-$30 now and they all come from the Bahamas !!! She says she doesn't know what happened to all the shells and no one has seen a conch on the beaches here for years now but she also mentioned that  there is hardly any other types of shells to be found anymore either.

While we were walking we also got the see the Navy Helicopter Pilots doing some practicing. They were dropping and picking up a guy out of the water and also on and off a boat too. Mom was amazed how they could hover the helicopter in place. 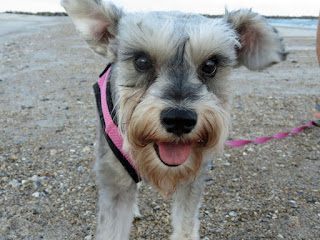 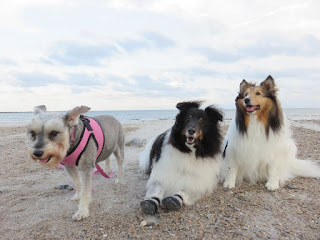 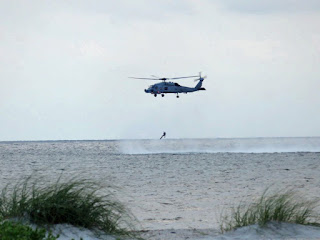 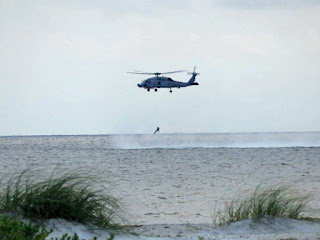 I helped save a sea turtle!

Last night we went for our usual evening beach walk and happened to meet a lovely lady and her sweet little schnauzer dog named Maisy. She asked us if we had seen the turtle wedged under the rocks and INSTANTLY Mom and I went on alert. By time we walked over to where it was there were a few more people gathered around talking about putting it back into the water.  I went straight into my Bark Ranger roll and woofed VERY LOUDLY - of coarse Mom had to interpret as not everyone talks dog (can you believe that!!)  Through Mom I told them that people are not allowed to touch or move turtles and that as it had been there since the last high tide - some 8 hours earlier - it was probably severely dehydrated. We also didn't know if the turtle was sick or injured and in need of medical treatment. The little turtle was only about 1 foot long and was a beautiful little Hawksbill.

Silly Mom had left her phone in the car as it had looked like it was going to rain so while we kept watch another lady went to call the Base Police.  They came very quickly and checked the little turtle - it was still flapping it's flippers so we knew it alive. They in turn called the turtle rescue and as luck would have it -  one of the police officers actually volunteers with the turtle rescue and he told everyone I WAS RIGHT  - that we shouldn't touch it and that we did the right thing calling them.  Sadly we had to leave before the turtle rescue came (it was still very hot and Mom was worried about us over heating) but the police said they would stay there and wait. The little turtle will no doubt spend the next few week recovering at the turtle rescue center.

Mom was so proud of ME for doing my bark ranger duties so well that when we got home I not only got a Frosty Paw - but 2 cookies as well !!!!!  Bark Ranger Reilly at your service :)

Don't say I didn't try to warn you!

Last night we went for an evening walkies on the beach and just happened to see the "Carnival Elation" leaving on its cruise down to the Bahamas. Now you may remember Mom and Dad ABANDONED us last year when they went on the sister ship to this - the Carnival Fascination. They didn't  talk much about it because they didn't really enjoy the cruise at all (people smoking all over the ship, yucky food and disappointing ports of call basically sums it up). So of coarse when we saw this ship I just had to try and warn them - but did they listen - noooooooooooooo - the fools just stood there on the deck waving happily as they headed off right into a storm. They can't say I didn't try to warn them :)
If you can't see the video - click here :)
Posted by Cowspotdog at 5:30 AM 21 comments:

Up close and personal

Mom says that once a year you should always get an up close shot - something to do with the passing of time - we don't understand what that means but if it involves extra cookies we are in :) 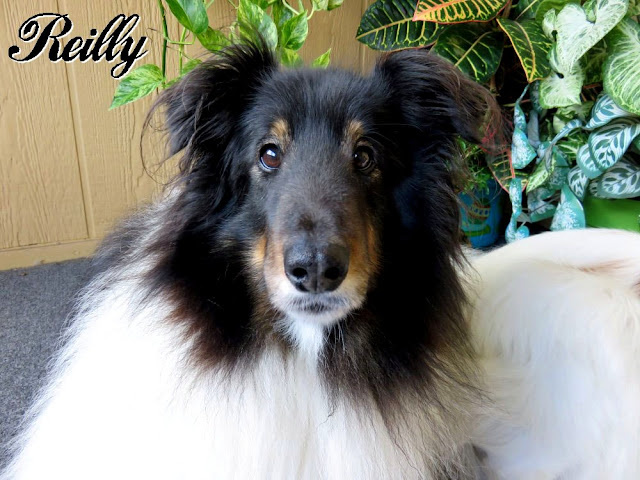 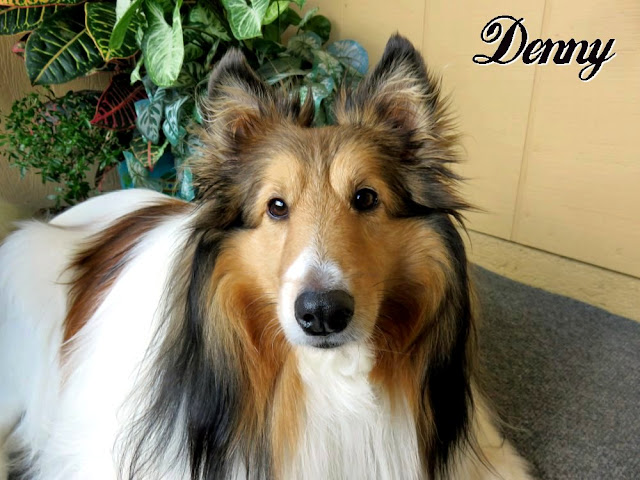 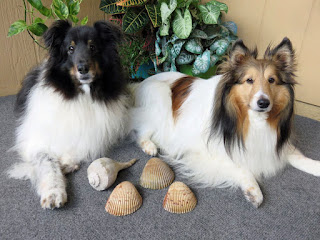 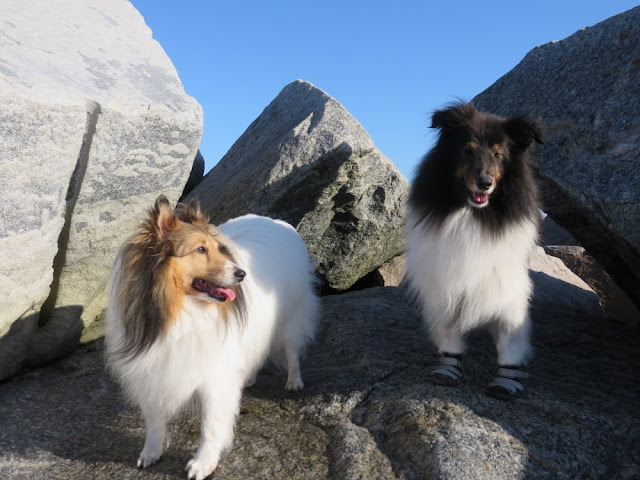 Oh my dog - how sweet it is - MY beach is covered in dognip (seaweed). I had the most pawsome time rolling and rubbing in it this morning - I got that wonderful stink all over my fur! I even found a rare 'barnacle sneaker' hidden in it. Could this day get better???????

For some reason Mom didn't seem to think of so when she wasn't looking I decided to take myself back to the boardwalk and wait for her there - only she couldn't see me from where she was so she panicked a bit when she couldn't find me. Personally I think it was her own fault as she was to busy watching the ships and boats go by.

Today we were lucky enough to watch the USS John P. Murtha (LPD-26) coming into Mayport. This is a BRAND new ship and will be the 10th San Antonio-class amphibious transport dock ship of the United States Navy, and has been named in honor of Congressman John Murtha (1932–2010) of Pennsylvania. The  John P. Murtha will be home-ported to Naval Base San Diego after it is commissioned in the second quarter of 2016 - it is actually on its way there now and called into to Mayport to refuel. We have included a video which is a little long as the ship was moving VERY slowly. If you can't see the video - click here

Did you know all ships are referred to as "SHE" even though it may have a male name - you can read about why they call them 'shes' click here.  We did the think the best explanation was in the comments section from Carlos Villegas who stated :


"In my sailing days it was explained to me that women carry life. Any vessel that can sustain life in an environment that people could not normally sustain life functions without her body should, appropriately, have a feminine name. Ships without a name are presumed to be cursed because they are thought to be barren" 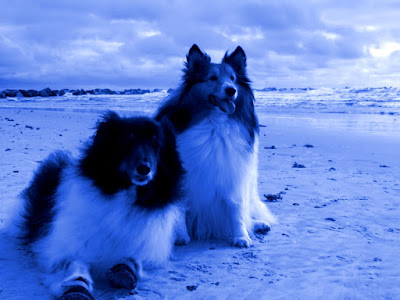 ♫ Blue skies smiling at me - nothing but blue skies do I see ♫ We went out last night for a walk around 8.00 pm when the sun was setting and not only did we get to see this wonderful blue sky - but also got to see the USS Samuel B. Roberts (FFG 58) arriving back home (oddly enough we actually saw it leaving when we went for morning walk :) Mayport is it's homeport so we see this one all the time :) Just as a side note - Moms hopes of finding shells after all the stormy weather have sadly been dashed but King Neptune did dump about 3 feet of new sand on MY beach so we can't complain :) 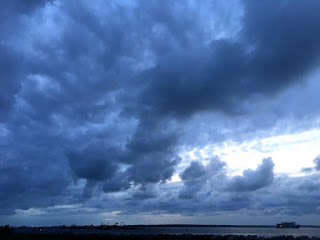 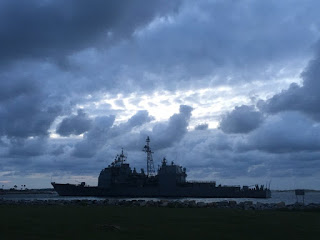 It is hard to imagine that it been over 10 years since a hurricane has actually hit land in Florida - but that is how long it has been and in that time 2 million more people who have never dealt with one have moved here - including us! Did you know the 'right' side of a hurricane is worse that the left and of coarse we are one the right side of it. The right side tends to have a lot more rain and wind and is also the side that sporns tornados. Needless to say - we will be staying inside today and keeping our paws crossed that everyone in Florida, Georgia and South Carolina stays safe and hope that Hurricane Hermine isn't too angry.

An Update - We got a little rain over night but that is basically it. It seems to have missed us which we are very happy about and hope everyone else in it's path are safe.