We got up early again this morning to go and watch the sunrise but instead we ended up saving 2 birdies!

It went like this - there I was doing my bark ranger patrol sniffing all the tuffs of grasses along the beach when I came across this big brown 'lump' in the sand - but when I got closer it moved and then started trying to jab me with its pointy beak! What The Dog!

Mom came rushing over and told me to sit/wait - she then checked Mr Birdie and noticed it had an injured foot. She stopped and asked a couple of people walking past if they could call the Navy Base Police but they said they didn't have cell service - Mom thinks they just didn't want to be involved and just kept walking on by) so Mom had to race back to the car - where she left her phone and she called them herself.

While we were waiting for the police to come a Wildlife Rescue Truck appeared and the ranger told Mom they had received a call about the bird last night - which it turned out was a Loon - Moms most favorite bird!. Mom was NOT happy with the rescue service - if they had received the call last night why hadn't they come and rescued the bird rather than leaving it on the beach all night in the cold and suffering?  As the guy was catching the bird (which thankfully was still very feisty) Mom noticed another brown lump closer to the rocks and went over to check it - it was a little female duck and she was in a pretty bad way - Mom thought she was dead at first but then saw her little head nodding and her eyes blink. She called the Ranger over and he picked her up too. Sadly it was cold last night (only 45 degrees) and Mom doesn't think the little duck will make it.

We didn't get to watch the sunrise and didn't get much of a walk on the beach - but we did feel good that we could at least help these two birdies. 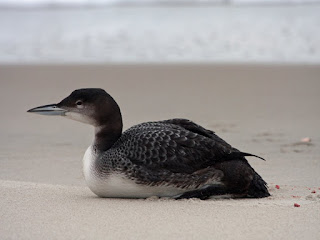 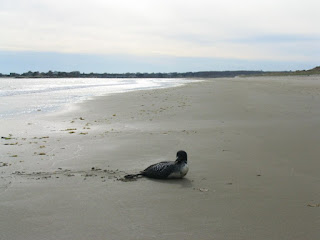 Posted by Cowspotdog at 8:59 AM