Mom decided to go to the beach today WITHOUT ME!  The skies were looking dark and cloudy (not every day is sunny in Florida) but they weren't forecasting rain until this afternoon - (as if the weatherman EVER gets it right!) The wind was also gusting between 20-30 mph and even the birds had the sense to ground themselves rather than trying to fly in it. The Mom bravely forged on - heading over to the breakwater first - to see all the pelicans and gulls that were gathering there.

She also got to watch a shrimp boat heading back into dock and the ship "City Of Hanoi" which according to VesselFinder is a container ship built in 1997 and currently sailing under the flag of Cyprus.  Then as she walking away from the breakwater she heard the blast of a horn and turned around to see the USS Mahan (DDG-72) leaving. This ship is an Arleigh Burke-class destroyer and  is the 22nd Arleigh Burke-class destroyer and the first Flight II variant. Like her predecessors, Mahan is named for Alfred Thayer Mahan, a naval theorist on sea power. She is the fourth U.S. Navy ship to bear the name and her home port is Norfolk, Virginia.  Mom thought it looked so funny in these pictures - more like a ship of the desert traveling across sand rather than a ship of the sea :)

Anyhoo - just after she took these pictures the biggest ever rain cloud band appeared and Mom got well and truly drenched - serves her right for going without ME! She looked like a bedraggled rat when she got home :) 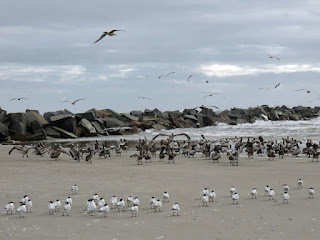 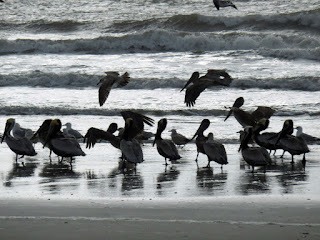 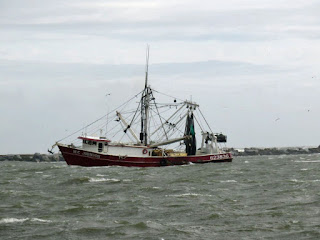 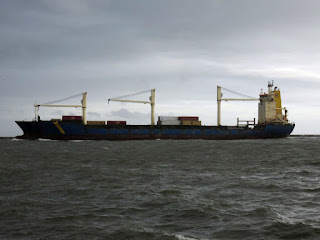 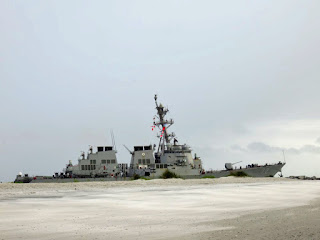 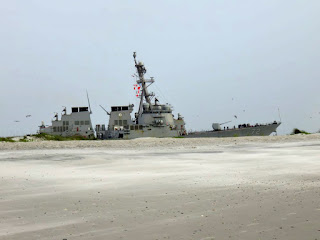 Posted by Cowspotdog at 1:19 PM