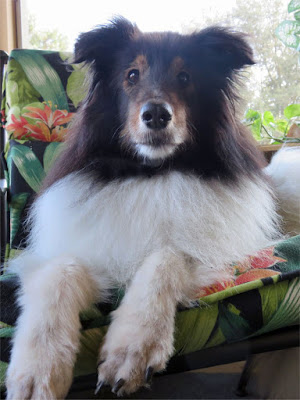 I the Reilly dog am on enforced rest .....so not fair !!!!  My bad paw has been giving me a LOT of trouble the past week causing me to limp even worse than I normally do and as a result is it also causing some problems with my back. Yesterday when Mom was giving me a brush she noticed a large lump on my back  (next to my spine above my back hip) - she called my dogtor and we went to see him straight away. The lump thankfully turned out to be a badly inflamed and knotted muscle so I have two new medicines and will be getting daily cold laser therapy on it. The hardest thing though - is I have to rest my paw and back for the next week and that means NO walkies.

Note from Mom - Sadly there is not a lot we can do about Reilly's paws - he has severe arthritis in both front paws which had caused his toes to splay and this leaves the inner parts of his pads exposed which is why he has to wear boots when ever we go for a walk. My sweet boy loves his walk more than anything in the world and is such a stoic uncomplaining guy - I am sure if his only option to go for walkies was to crawl on his knees - he would. For now we will just take much shorter walks from and hope and pray his new medications will help ease his arthritis which also is affecting quite a few of his joints as well. The good news is that the lump we found between his toes last week we were so worried about had just disappeared.

Posted by Cowspotdog at 8:26 AM