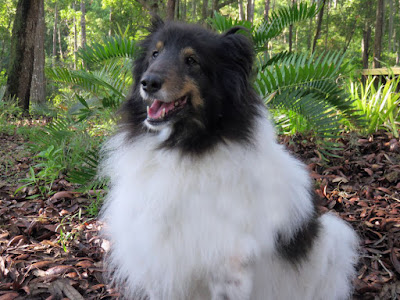 As many of you know - I the Reilly dog suffer from many allergies - when I had a patch test done by a dermatologist Vet in Memphis I tested as severe reaction to 98 out of the 100 irritants.  We have tried many different medicines, shampoos, food and diet restrictions but the only thing that helped was Depo Medrol Shots which I was getting once a month and then every two weeks. My allergies did ease up a little when we moved to Florida and I was able to go back to once a month shots. (Note - Mom never liked using these shots as there are other medical issues it can cause but scratching myself raw also wasn't an option as I was getting constant skin infections). When I had by foot surgeries though I wasn't allowed to have the Depo Medrol shots (it suppresses the immune system and that is not a good thing when you have surgery) and our vet decided to give Apoquel another go. We had tried it for 3 months when we lived in Arkansas but it didn't help at all.  Whether is different allergens here in Florida or maybe the climate is helping - we don't know - but the Apoquel is working awesomely now and not only has my scratching stopped - but my fur is growing back ! It has been a long time since I had my big old ruff around the neck - but look at it now.  So don't give up - even if you have tried something before and it didn't work - maybe look at giving it a second go.

Posted by Cowspotdog at 8:46 AM