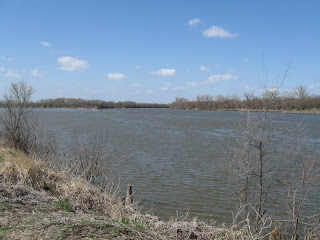 It was such a nice sunny afternoon that we decided to go for a drive. We had no idea where we we going, we were just "following the road to see where it takes us" is what the mom said. Where it took us was this really cool place called the Convergence. It is where the Missouri River on the right of the picture meets the Platt River on the left. When they combine they become the Mighty Missouri. Mom was quite fascinated by what looked like the remain of old docks 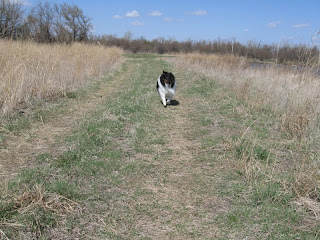 - that once would of been quite impressive as they appeared to of been quite long. They were on both sides of the river. The river must of been much deeper then it is now for there are a lot of sand bars and it looks quite shallow even so it water runs very fast. We followed the road along the side of river and I was so busy sniffing I didn't see how far mom and dad had got ahead of me, when I noticed I came running as fast as my little legs would go....mom said I was worried where they were but really I knew they were worried where I was - you know what parents are like - they ALWAYS worry. 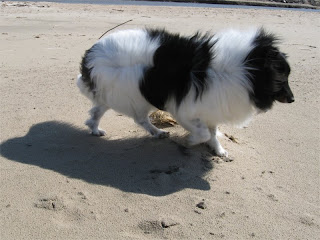 We kept on walking and eventually came to this area where there was a river beach. I have never been to a beach before, there was lots of sand and it felt a bit funny under my feet, but it was great fun to run on and felt very cool. As you can see it was also pretty windy but I didn't mind at all - I was having to much fun. 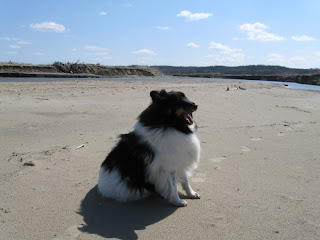 Mom was just telling me that she was checking this river out on Google Earth Maps and this sub branch of the river where I am ..... isn't there on the maps and she thinks this probably happened as a result of the winter flooding. That is a very big wide area the water cut away and there is not a lot of water left now. We also saw a lot of people doing something called 'fishing' at the river - it looked to me like they were just sitting there with a stick in their hands. 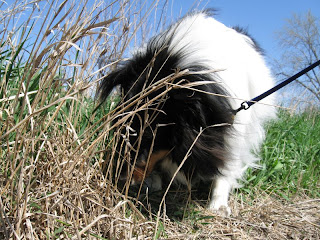 On the way back I heard something rustling in the bushes and had to check out what it was - of coarse silly mom had to poke that camera thing close by and it scared what ever it was away. It certainly sounded very interesting though. Did I mention that there was some amazing smells on this walk - things I had never smelt before. The one bad thing was there was also some big prickle things - they looked like little footballs but 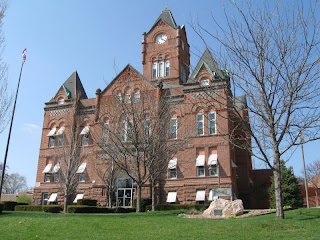 covered in spines and they stuck to moms coat and mine. Luckily mom had a comb with her so when we got back to the car she check me all over and combed all those nasty things out. On the way home we drove through the small town of Plattsmouth and mom just had to stop and get a photo of the court house. I don't know why as it was just a building but she seemed to like if for some reason. You can click on any of the photos here if you would like to see them bigger. I am definitely off to have a snooze now and dream about things hiding in the bushes.
Posted by Cowspotdog at 5:35 PM