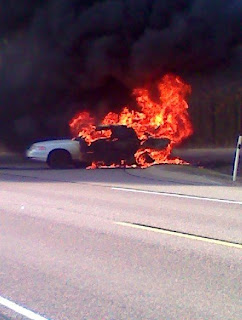 My dad and his daughter Valerie are off in Wisconsin this weekend visiting his other daughter Elise. She came to visit us at Christmas and I liked her a lot. Anyway, they had been to visit the "House on The Rock" and on the way back saw an accident happen on the other side of the road. A women in a white car had stopped to make a left hand turn and SUV just plowed straight into the back of of her. The SUV stopped completely but the white car spun around and around and started smoking. My dad stopped immediately and as he did so Elise jumped out of the car and raced over to the white car which was now on fire. She pulled the woman out of the car and helped her get away from the car. Dad went straight to the other car and checked on the women in that. She had banged her knees pretty bad and the air bag had hurt her chest but she seemed okay. He checked around her car and there didn't seem to be any danger of fire near her. Elise's friend in meantime was calling 911 and just as Elise got the women from the white car back to dad's car, the white car exploded in a ball of fire!!!! All of this basically happened in a time frame of about three minutes. My poor dad - he is so proud of Elise and he was also so scared when he realized what Elise had done, especially when the car exploded......a few seconds either way and both Elise and the women she saved could of been badly burnt or worse. I think without a doubt Elise was an absolute hero and we give her 4 paws up!
Posted by Cowspotdog at 8:40 AM