Today mom and I went somewhere new and the most amazing thing - it's only a few street from where we live and it's called a playground. We had the whole place to ourselves and mom said it was okay for me to act like the youngster I am... so here we go. First off we saw all these funny shaped things and I must admit I wasn't to sure about approaching them at first. But of coarse Mom being brave like she is, she showed me that it was okay. So off we went to get a closer to look, and guess what - I got to play shop. I have never played shop before. Mom says I have to say in my best woofy voice "May I help you" - and how could anyone resist buying something from a cutie like me. 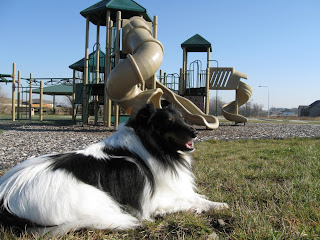 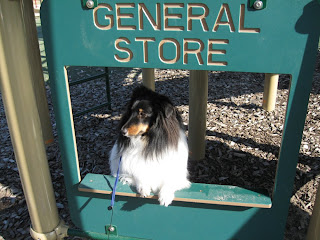 Next I went high up on this deck thing and we crossed a bridge and I went through a small tunnel (mom couldn't fit gawoof gawoof) then up steps and down steps - it was like the coolest agility coarse. I think one of these in my back yard would be so much fun but mom says it would take up my whole back yard and I would have no where to run. Next we decided to follow a path and see where it took us. It went along the edge of a little stream and it was nice to hear the water tinkling over rocks. We eventually came to this neat little bridge and there was a big white poodle standing at a nearby fence barking - mom thought it was a blood hounding baying to begin with but then he popped his head up and was a poodle she was very surprised. Me, I just ignored him as there was too many good smells that needed smelling. 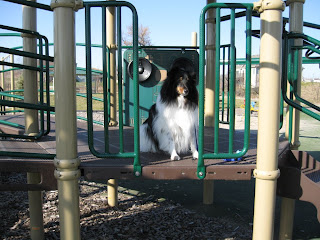 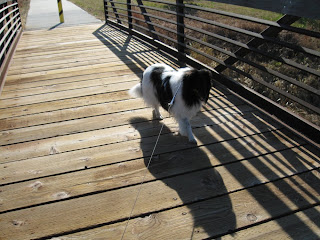 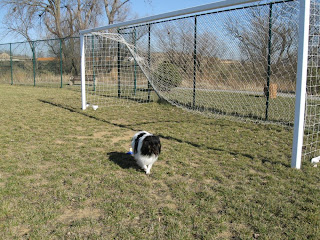 We eventually came to what mom called a soccer field and she said it was a good thing there was no one playing as I might mistaken for something sitting in front of the net like that - hmm I wonder what she meant? There was also something called a basketball half court and a baseball pitch. Mom practiced some recalls here with me and I did it every time. So that was my my Frolicking Friday, I liked everything...but I think best of all was the long winding path as there was so many good smells and now we know we can follow it, we can go there when ever the weather is okay. It pays sometimes to go and explore your neighborhood as you never know what hidden little park you will find.

Posted by Cowspotdog at 1:24 PM