Now as you know - I am the PERFECT dog. I walk nicely when we go to the park, I don't bark at other doggies and I generally just do my own thing - which of coarse involves a lot of sniffing. So what was the Mom thinking this morning when she took ALL 3 of us to the park??? Now I am not bemoaning about the park - it is the first time in weeks it has been cool enough for us to go - but to take an untrained puppy (Denny), the psycho walker (Jackson) and perfect me was quite a handful - to say the least. 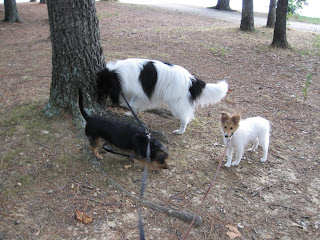 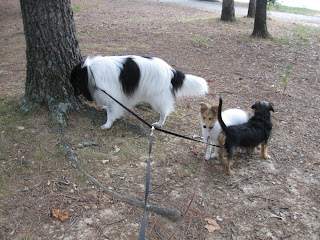 Silly Mom thought it would help to have me and "IT" on one of those double walker leads - BIG MISTAKE. "IT" is a weaver - he weaves back and forth, runs under me, around me, in front of me and being on a double walker - that means I get all tied up. "IT" also has very very poor doggie skills and will go psycho when he sees another dog - which means more getting tangled up. I am VERY pleased to say "THING" (I may have to consider calling him Denny after this) walked perfectly - which considering it's the first time he has had a lead on - was AMAZING. Mom was very proud of the little guy. 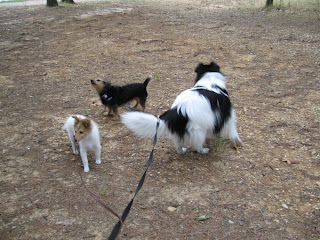 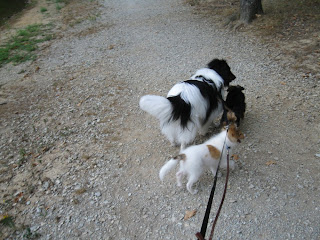 Both Mom and I were a bit saddened to see that the park is no longer green - but after two + months of 90+ degree and no rain - it is to be expected. Not that I really cared - I just wanted to sniff and my dogness there were so many great smells! And so we ATTEMPTED to walk - with "IT" weaving every which way and getting me and even Mom all tangled up and even getting tangled up with the trees!! Poor Mom was so frazzled by time we headed back to the car I thought she was going to throw "IT" in the lake and drive off - forever leaving stories of the "IT" lake monster at Craighead Forest Park. She didn't of coarse but vowed not to take all three of us again by herself. It looks like we might have another cool day this weekend and she says Dad HAS TO take the "IT". 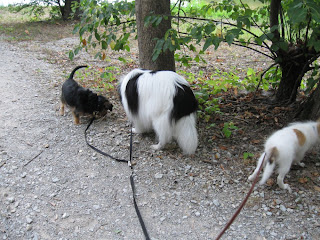 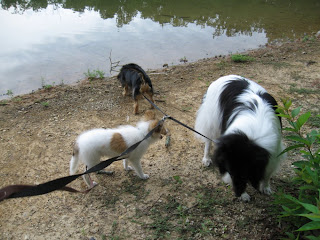 So that was our big adventure and it sure was great to get out (even if it was stressful) and now the Denny knows why we were soooooo excited when Mom said the magic word - P-A-R-K.

Posted by Cowspotdog at 1:31 PM