Invasion of MY park!

We got up early and headed to the park for yet another beautiful day of adventuring - but MY park has been INVADED - YES - INVADED I SAY !!!!!!!!!!

As if it isn't bad enough that those nasty horrible tourist types have parked  in MY PARK - they bring their Shrunken Humans (kids) with them who scream and run around like banshees!!!  They even speed along on MY paths on those two wheel contraptions even though there is signs saying NO two wheel contraptions (bikes) allowed!

And then there is the Canadian Geese - which I HATE !!!!   Now I won't even look at the ducks or the white geese - but those Canadian geese - dog oh dog they ruffle my furs! And today there was hundreds of them - biggify the photo and you will see them all - and this was just one flock! LET ME AT THEM MOM!!!!!!!!!! Mom had to tip toe between all the goose poop on the path (which was quite a sight to see - Mom tip toeing that is - not the poop) 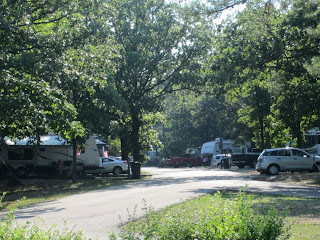 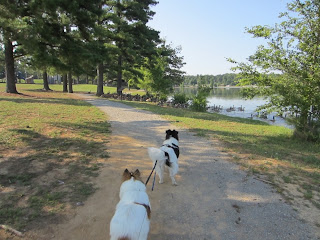 And NOW - as if all of this isn't bad enough they have roped off parts of MY park and put signs up everywhere because they are having "Music in the Forest" tomorrow night. There are also all kinds of tents and food stands and weird smelling tall blue boxes that Mom called Porta-Potties.

Okay I don't mind the food stands - in fact I would be happy if they left them there - nothing like a nice snack after a long walkies  but the Pony Rides and bouncy blow up things - for the Shrunken Humans to play on - why encourage them to come to MY park I ask and encourage them to scream like banshees even more? 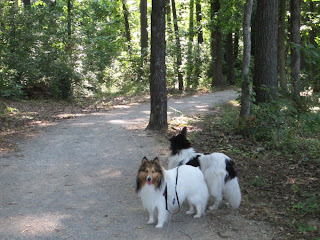 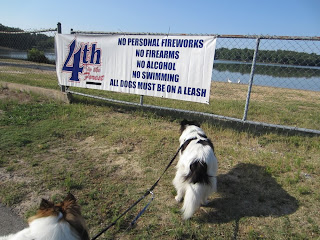 And what is with the sign - that is a whole lot of NO's. Personally I think those Shrunken Humans should be on leashes and not us dogs!

The Dweeb of coarse was shaking in his paws at the sight of all these weird things - Mom even had to give him one his chill pills when we got home. Even the Tree Rats were hiding in the top of the trees today - come down you little buggers - come down!