What you may not know about Jacksonville Florida

Can you believe we have been living here in sunny Jacksonville Florida for 6 months now. Mom says this is the most at home she has felt of any of the places Dad and she have lived. But there are unique and quirky things about Jacksonville in particular you may not know. Like for example -

U-turns - to get anywhere around here requires making multiple U-turns - Mom calls it the U-turn capital of the world :) People in Jacksonville also love to IGNORE no-u-turn signs - especially the ones at traffic lights ! To go left from our road means going up to the traffic light and making a U-turn and when coming back from the beach we have to go past our road and make a U-tun to come back. A lot of the U-Turns have been created because of the wide meridian strips down the center of the roads that have lots of trees planted in them. 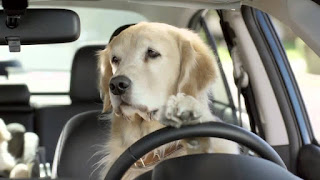 Speeding - people in Jacksonville LOVE to speed and we are not talking 5 miles over the limit - we are talking 20-30 miles over the limit!!!  Most the roads around our area have a speed limit of 45mph but it seems  60mph is the norm. The bridge we go over to the beach has a speed limit of 55mph  but people fly across at 80 mph leaving Mom in their wake :) Mom was worried Florida would be full of retirees who drive slow - bawwwwaaaaahhhh she is the only one driving slow!

Weavers - Mom also says this is weaver driver capital of the world - it goes hand in hand with the speeding - people weave in and out of traffic like crazy always trying to get there 1/2 a second faster. Mom always laughs at these people and she ALWAYS catches up with them at the next light so all that weaving doesn't get them anywhere faster. By far the worst weavers are the Motor Bike Riders though - Mom has seen so many near collisions because of their recklessness and their speeding. 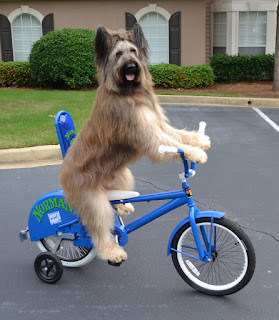 Circle Drives - nearly all the housing areas are made up of circular drives that have just  ONE entrance/exit. This is something Mom really doesn't like because if there was an emergency like a hurricane and our entrance got blocked we would have no way to get out. Mom doesn't understand this circular drive concept as it also makes going anywhere difficult - you can only follow main roads and not cut through side streets because none of the streets connect.

Bike Riders - with all the wonderful sunny weather we have - people love to ride their bicycles around here but sadly many of them seem to think they have their own set of rules. Now we have wonderful bike lanes on nearly every road and they are 3 foot wide but it drives Mom crazy when bike riders prefer to use the road and not the bike lane or they ride right on the line marking the bike lane. Bike riders here also don't seem to like to follow cross signals - choosing to cross roads when ever they feel like it and causing traffic to stop and wait for them.

Florida time - people here seem to eat later, go out later and many stores are closed on Mondays or at least one day during the week. That can be frustrating when you forget but Mom understands it serves the public better as people who work all week - at least  they know they can shop on weekends. 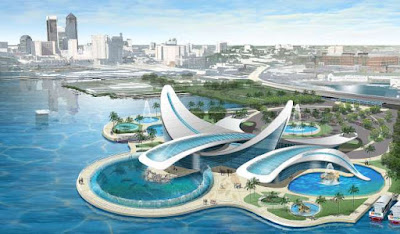 Jacksonville Aquarium - Plans are in development for them to be building an Aquarium here similar to the one in Atlanta. They are looking to build it in down town Jacksonville and have 3 possible locations - all on the St Johns River. This will allow them to run a ferry from the Aquarium to the Zoo which is also on the river. It will be a few years before they start on it though - the picture shows what it might look like when completed.