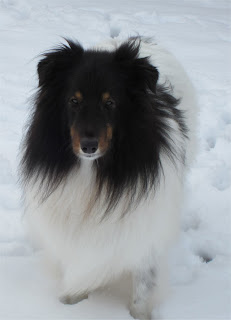 Yes - the Wuzster (otherwise known as Denny) is scared. He read that Santa Paws might not visit him because he has been so naughty lately. Firstly he has no idea who Santa Paws is and that scares him, he has no idea what Christmas is - so that is scaring him - REALLY - what doesn't scare that Wuzster?

Can you believe Mom actually told ME off because I was telling Wuzster that Santa Paws was an evil huge old rabid bear that would come down the chimney during the night and eat him and that Crispmas (as we like to call it) is when naughty little dogs get thrown into the oven and cooked until they are crisp!!! Mom says the Wuzster doesn't understand my dry sense of humor and that he has a "sensitive" kind of soul and frightens easily - which really means he's a WUZSTER! 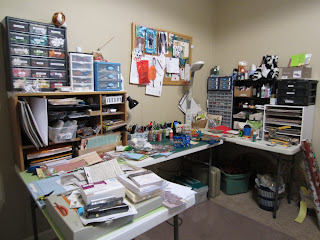 For some reason the little dude got under his blanket in his bed and hid all night - we just heard strange little whimpering sounds occasionally so we knew he hadn't suffocated under there!!!! Dog oh Dog - what can you say. That will teach him calling me an OLD lazy dog ! Actually Mom and I have been VERY busy making our Christmas cards (and a big old mess in the her craft room - sssshhhh don't tell her I shared this - she would be horrified) Chuckles - that will teach her for letting the Wuzster on my blog ! Ahhhhh...nothing like a little doggie revenge :) Oh - we got some more snow over night - sigh I am one happy boy!

Posted by Cowspotdog at 9:44 AM