The Plight of the Grand Canon Condor 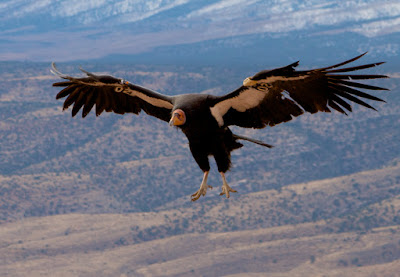 This afternoon we were sitting with Mom watching a PBS program on the Condors of the Grand Canon and Mom was just astounded and saddened that there are only 72 of them left in the wild where as once they numbered in the thousands. Now these are huge (with a wing span of over 8 feet) and somewhat ugly looking birds but they are also natures clean-up team - eating things that die in the canon. Sadly it is that very thing that is also killing them. See hunting is still a big thing in and around the canon and hunters use lead bullets. When they leave the carcass of a deer behind they often leave the pellets in them and the Condors eat this and it gives them lead poisoning. The TV show followed a pair of condors over the last 8 years and each year they have just one baby and for the last 7 years each baby has died due to lead poisoning which they absorb from the regurgitated food (sadly the babies can't absorb any level of lead). Condor babies are also very slow growing taking 6 - 8 months before they leave the nest.  This year the Condors actually managed to raise their first baby all the way through to it taking flight but it takes some VERY dedicated people who catch each and every Condor on a regular basis to check their lead levels and treat them if they are found to be high. If you look in the picture you can see each Condor has a number on their wings. They are also leaving non contaminated carcasses for the Condors to feed on - especially when raising a chick. They may be ugly looking dudes but it would sad to never see them soaring in the thermal above the canon. 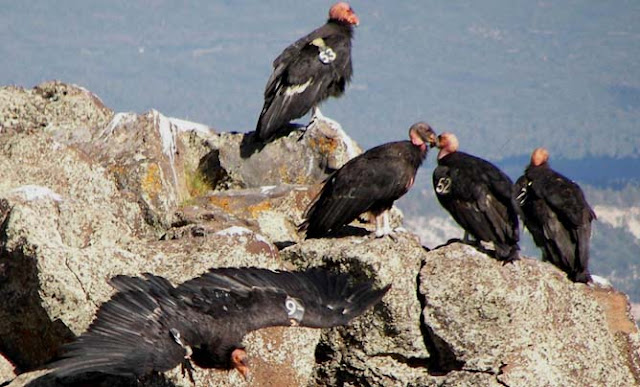 Posted by Cowspotdog at 5:32 PM