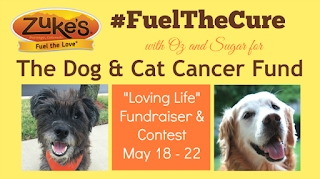 We are doing double duty today with our day 5 of the Photo Challenge and also joining  Oz and Sugar's Loving Life - #FuelTheCure - which is helping to raise money for cancer research into Dogs and Cats thanks to the wonderful support of Zukes. Please think about joining in as Zukes is donating $5.00 for each post. You can also win some Zukes and we all KNOW who totally yum those are - so what ya waiting for? 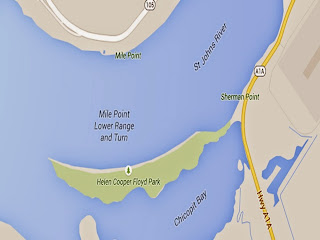 Today we went to see a little teeny tiny 'strip' park (and no we didn't take ours furs off!!!) The park, which is called the Helen Cooper Floyd Park - has now been renamed the Helen Cooper Cowspotdog Park because I have pee'd there and  it now comes under my Bark Ranger protection. The park itself in on the intercoastal waterway also called the St Johns River and we always see a lot of people swimming and fishing there on the weekend.  It is about 30 foot wide and about quarter or half a mile long (Mom is terrible at judging distances :).  Sadly when we got there we saw signs up saying it is closed between Summer of 2015 and Winter of 2016 for repairs (it looks like it had some serious storm damage some time ago) but there was no work being done and we decided to use our selective blindness (which allows us to blindly not see anything we don't want too) and go explore anyway :) Obviously the peeps that visit on the weekend also suffer with it :) Now the end half of the park is actually a 'marsh land wildlife refuge' and the signs there said it is "forbidden" to enter and we decided to abide by that as we didn't want to disturb any nesting birdies in that area.

So what did we see on the half that is normally open to the public - well this area of the intercoastal waterway is very much a marsh area so there it a lot of  herons, cranes, sea eagles or hawks and lots of small birds some of which we have never seen before.  There are also lots of fish and shrimp and we even saw some turtle tracks (it is actually to start of the egg laying season for turtles here now). The first picture below shows us on the left side of the 'strip' and the next one shows ME on the right side having a run on the sand. The right side has a sandy beach whereas the left has a rocky beach.

Here is one of the big blue herons we saw - he was having a feast on baby fish. And lastly - this poor fishy has obviously been dieting way to much as it was just bones!.  Mom said someone had caught it and fileted it then had thrown the remains back into the water (she thinks it is what they call a dolphin fish - not a real dolphin but a fish named after them for some odd reason). It doesn't show up well in the photo but is was actually about 3 foot long. 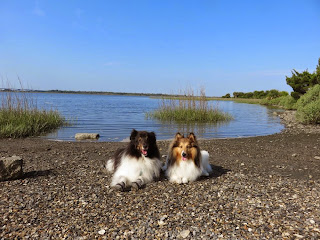 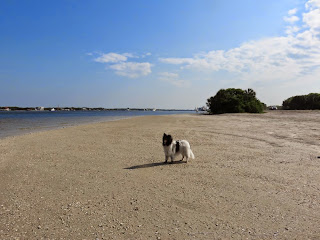 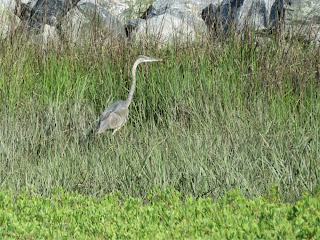 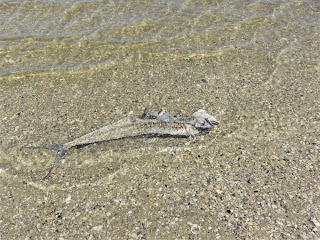