Some things we have learned 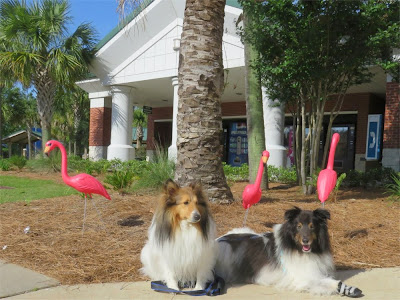 We thought we would answer some question we have seen popping up in our comments today.

GATORS - no we haven't seen any and we are hoping we never do. Mom is super vigilant and won't let us within 20 feet of any lake edge.  Mom did some research and in an average year only two people are killed by gators and between 4 - 12 are injured by them. There really isn't any count kept on dogs being chomped up but from the research Mom did it look like there are 10-20 each year that are reported (there are probably more that aren't). That may seem a lot but to keep it in perspective many more dogs are euthanized in shelters each day! People tend to fear the gruesomeness of the attack which makes our fear of them seem worse then it really is - a bit like shark attacks too.

THE NON-PEEING DWEEB - Yes it is true - the Dweeb (and now you now why I call him that) will not pee or poop at any park. He will barely even sniff while we are at the park. He has always been that way and will only go in his own backyard.

DOG FRIENDLY - Yes - the area we chose to live in is very dog friendly (which is why we chose it ) - now admittedly they are pretty strict on the whole leash thing and Mom says we probably won't be using our invisible leashes much any more but the parks are all dog friendly and we are super happy to see that they all have "poop" stations (free poop bags and waste bins) placed at regular intervals. The big farmers market is pet friendly and there are many restaurants that have outdoor patios that are also pet friendly.  There are LOTS and lots of dog parks around Jacksonville too and many of them use to be golf courses - they are all fenced so there is lots of room to run and lakes to swim in but Mom says we won't be visiting them very often as they very expensive to use  and cost between $11 - $16 per visit or yearly passes for around $350. The parks we have been going to around where live are free (we did buy a yearly pass for Hanna Cowspotdog Park but that was only $90 and for access to the beach and park well worth it)

Other things we have discovered - Mom and Dad nearly fainted when they saw how much it will cost to register MY cars and changes over their licenses - over $800 for the two of them (it only cost about $280 for both cars and licenses in Arkansas). We doggies also have to be licensed here in Florida $20 each (we didn't have to be in Arkansas) Gas of coarse is a lot more expensive here - 30 cents more than in Arkansas and Dad says he is considering trading in MY mini van for something more fuel efficient. MY hybrid car that Mom drives is doing great around here and she averages 40 miles to the gallon. One of the REALLY REALLY good things that Mom totally loves - is that there are sidewalks everywhere and you can actually walk or ride a bike to any the places we want to go - how cool is that? Sadly Mom had to give up her bike as her old knees can not handle peddling anymore but she loves to walk and so do we - so win win we say :)
Posted by Cowspotdog at 7:16 AM