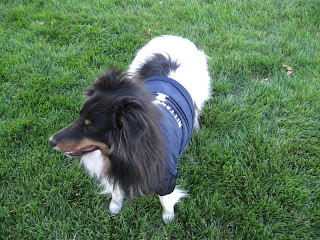 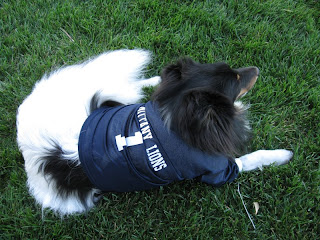 Oh no !!!! Dad told me that he will be watching his beloved Penn State play their first game this Saturday. Our local cable company didn't carry the Big Ten games but this week they signed a deal and are now going too. Now I don't mind that dad watches the games - even though it means he ignores me while it is on - but what I don't like is when he jumps up out of his chair and cusses and the TV because for some reason cussing really worries me. Dad doesn't say bad words or anything but he calls the TV odd things like "you stupid umpire, are you blind, what were you thinking, how could you miss that....and so on" Mom thinks it is the 'tone' dad uses that worries me although she is not sure why because he has never used that tone with me and never uses it around the house - except when the foozeball is on. Mom says I am just a 'sensitive" boy. Either way, it looks like I will be protecting moms feet in the craft room while the game is on. Mom doesn't understand the game so she usually goes and does something else. I just hope dad doesn't want me to wear the silly jersey again this year!

Posted by Cowspotdog at 8:49 AM