Update From Life Under The Table

We thought we would give you an update on the progress of the 'above' table stuff - we noticed a few of you have mentioned you would like see it.  Here I am beginning my BORING life 'under' the table (that is where I am to be found when ever the Mom is working of "DAD'S" silly train thing. 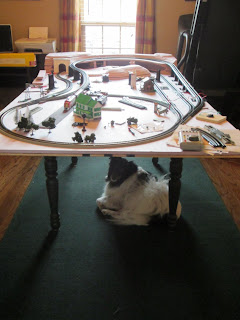 In the beginning it was just a flat old surface and some weird shaped thing on the end.  Well as you can see - Mom has turned that into a mountain with the railway going over it and under it. She modeled it on a roadway she went through while in Italy.  She made this using paper mache - (Finally something to use all that shredded paper on - the best way to deal with bills!) 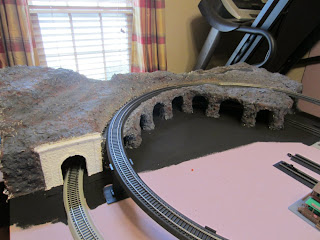 At the moment they just have a base coat of paint on but eventually they will be covered with trees and greenery.

Mom has added some more hills to the other end of 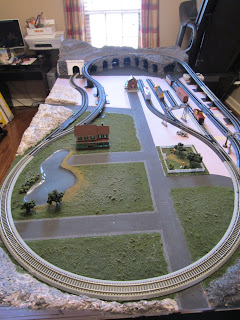 the board and the side - they are still in the process of drying so have not been painted yet. As you can see the roads (and YES - sidewalks) are all in place. 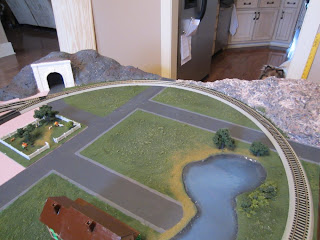 Mom has never understood why so few American cities seem to have sidewalks - in fact there is none where we live so Mom said "her community was going to have sidewalks no matter what!!"  We also have a lake in place - it is still drying so it still looks a little cloudy but it will eventually be clear and look like real water!  She has just started putting down the grass and some shrubbery and it is actually  a much prettier green then the photos show.  Mom says she will do another update in a few more weeks and I in the meantime will be found 'under the table' - the ever faithful dog at Mom's feet!
Posted by Cowspotdog at 11:52 AM