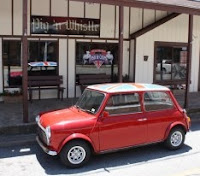 We decided to go on an adventure this weekend after hearing about an English Pub. (The Mom is always craving English/Australian food) so off we went. It is called the Pig 'n' Whistle Pub and is in Hardy, Arkansas. It's about an hour and half from where we live and we had  a really nice drive through the Ozarks to reach it. Hardy is a small town with a resident population of about 800 but it is on the Spring River so during summer is a very popular holiday place. Many people have holiday homes built along the river. For the rest of the year though it is pretty much deserted.  The couple who opened the pub are Phillip & Rebecca Ashcroft - he is English and she is originally from Hardy but they met while they both worked on a Disney Cruise Ship. Phillip told Mom he had also lived in Sydney for a year and he LOVED it there. 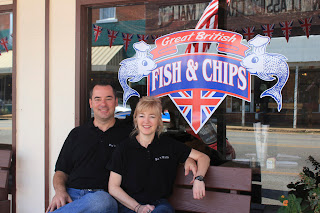 Mom and Dad had lunch there - Dad had 'Bangers and Mash' (a type of English breakfast sausage) and Mom had a 'Cornish Pasty'. Mom ate quite of bit of Dad's 'bangers' too !  Can you believe they didn't save us any! Mom was super super happy too as they sell some British 'stuff' at the pub and she was able to get a new "brown betty teapot" (dad broke the handle on her old one). And see the little Mini - that is always parked in front of the pub - it a 1977 mini - made in England and then sold in New Zealand. It came to the USA in 2000 and was converted to left hand drive.

After lunch we went and looked around all the antique trash/treasure stores (there are a lot of them in Hardy although they are only open during spring, summer and fall). Mom was hoping they might find some train stuff - only one store had some and sadly it was the wrong scale but she did find one thing for the Dad - we will show it later in the week. Hope you all had a great weekend too.
Posted by Cowspotdog at 12:19 PM