Mom took me to Dogtor for a check up following my tooth removal and while we were gone - all of 15 minutes - "Some doggy" who shall remain nameless but is a total DWEEB! found MY packet of soft treats that Finn and Gizmo sent me and he SCOFFED the lot!!!  Now Mom was keeping them just for ME because they were soft and I still have a sore mouth and all our other treats are the crunchy kind so I am NOT happy!

Of coarse he cried and whimpered that it wasn't him and tried blaming it on some troll that appeared from nowhere, got them off the table, took them outside and ate them all. As if - we all know that trolls eat troll treats - not dog treats!!!!!  No - the evidence is against him - now I just need to think up some devious payback - maybe I can convince Mom to give him 2 baths tomorrow - in the middle of the mall - with lots of strangers watching - and who all want to pat him - yeah - that should freak him out sufficiently!!! 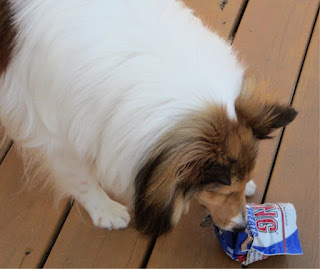 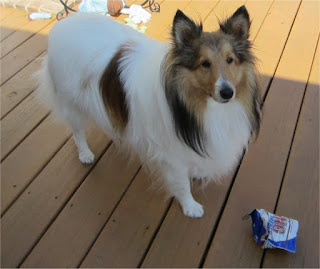 Posted by Cowspotdog at 6:47 AM