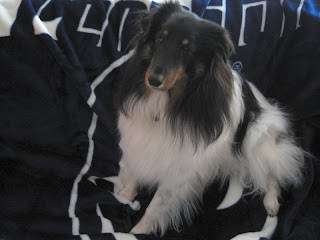 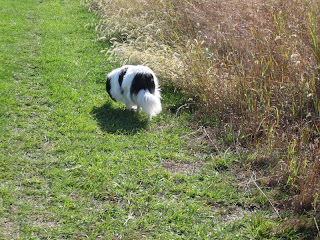 Dad is watching the foozball. Gosh, my dad jumps up and shouts and hollers and gets all excited and angry all the same time and I have no idea why. He was watching something on that square box thing that he likes to stare at so much.......and he scared me!!!!!! I stayed by my moms feet in the other room the whole time or I was outside. I don't like it at all when the dad watches that foozball thing. My dad supports something called Penn State and this is a pic of me on his Penn State Blanket - this is how it should be, a dog sitting on a cat (mom says the nittany lion is a cat and I don't much care for cats) You can see how worried I looked just being in the same room with the dad during the game.

Today, to make up for scaring me yesterday, the dad, mom and I went to leash free park and I was having the best time until these two HUGE dogs came bounding up trying to sniff my butt. They scared me so much that I took off running and I ran as fast as my little legs could go and they chased me. Then the dad stepped in to stop them - he was my hero. He called me back to him to him and then laid me on my side and just calmed me down and the big dogs had a sniff, (which I thought was rather rude) and then they just lost interest in me after that. Dad learned that from watching the Dog Whisperer and was surprised how well it worked. We continued to walk and the other dogs didn't bother me again even though I woofed at them. Thankfully, there was no ducks today - three scares in one week is enough for any young dog! 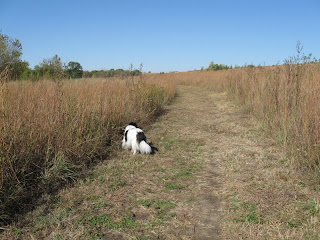 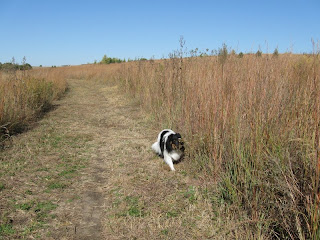 Posted by Cowspotdog at 6:08 PM