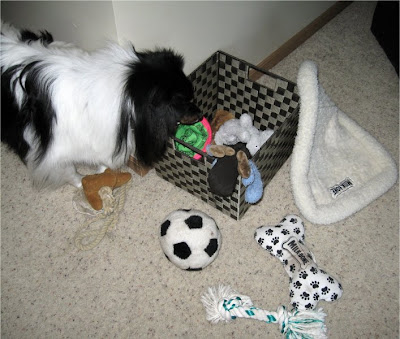 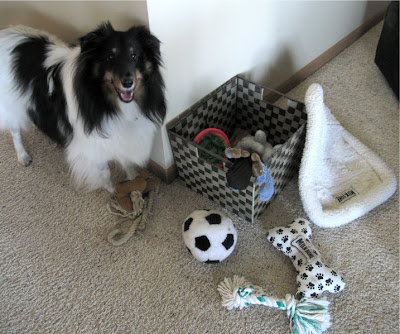 Oh no, our house is being invaded with monsters!!! Now we have a toy box monsters too and you won't believe it but his name is Reilly too!!!!! This is just getting a little weird that all these monsters have the same name as me. Here I am checking to see if the monster was still in the box - can you believe it threw nearly all my toys out!!!!! Of coarse I did have to take a few out myself just to make sure it wasn't hiding under any of them. Oh there is something else really odd about this Toy Monster. See that fluffy little bed. Well when I was just a wee pupster that was my crate bed...mom says I use to sleep on it all the time and that I only took up space on a quarter of it. Hmmm I think moms pain meds are making her a little gaa gaa - how could I ever of been that small! Anyway - back to the bed. Mom keeps putting the bed away in the cupboard (she was hoping to keep it for if I ever have a little sister) but the toy monster has figured out how to open the cupboard and the bed keeps ending up in my toy box again. Is that one clever toy monster? After I had checked the box, I smiled happily at the mom and said "no mom - there is no toy monster in there now" But you know what isn't fair - the mom is making ME learn to pick up my toys and put them back in the box. THAT ISN'T FAIR - if the toy monster takes them out, he should have to pick them all up and put them back in the box. And darn...... if that wasn't bad enough, the mom used logic and said she picks up after me all the time, so therefore I should pick up after the toy monster. LOGIC is just wrong I think....and shouldn't apply to dogs! The mom also said I have to say thank you to everyone for their kind wishes. Today she is feeling a little better. And for those that asked, the Chiropractor broke the mom's ribs. Her normal Chiropractor was off sick and she had to see someone else and it was just an odd combination of not not laying quite flat and being too tense. She doesn't blame him...it was as mom says "just one of those things". Well I am off to see what the toy monster is up to now and I guess I had better check on all those other "Reilly" monsters too.
Posted by Cowspotdog at 10:55 AM