Adventuring we will go

Mom suddenly decided this morning that it was good day to go adventuring, trust me - we didn't need any encouragement to go. We were out in MY car in the blink of an eye! We went somewhere new today - to a place called Lake Pointsette State Park. Now as parks go this is pretty small and Mom says she was a bit disappointed because this is actually a HUGE lake but the only access to it is right here at the boat ramp - the entire rest of the lake area has all private houses around it and you not allowed along the lakes edge. That is so unfair - how are we to find a nice dead fish to roll on???? It was also a very overcast day today - in fact it started raining just as we got back to the car - so the photos are a little dark. 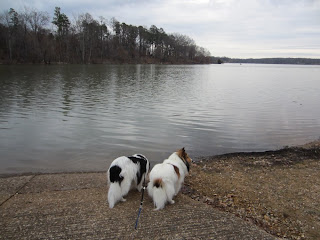 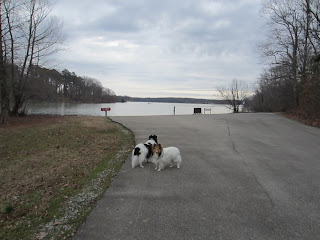 After a quick look around at what tiny bit of the lake we could see we agreed with this sign 100% - NO swimming!!! Why any doggy would want to get wet is beyond us! Time to head up into the woods - but first we have to cross the balance beam bridge - I think we deserve a perfect 10 for our routine - side by side we go - you don't see many doubles on the balance beam do you! 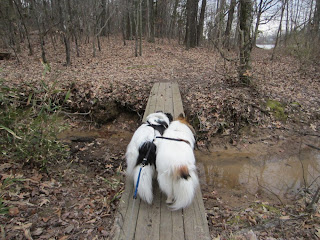 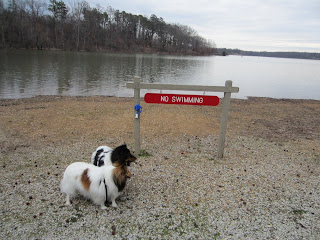 Next we dragged helped Mom up the hill reminding her to be careful not to trip on any of the tree roots or to slip on the moss. Can you believe she was mumbling to herself about how pretty it looked - like natures steps....blah blah blah - we just wanted to get to the deer do-do we could smell nearby - now that stuff is pretty! 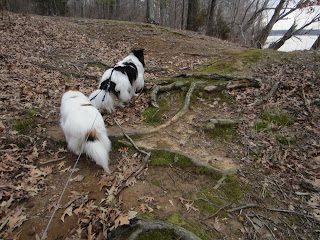 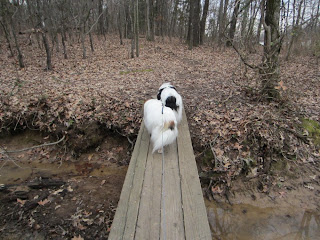 When we reached the end of the trail look what we found - more stuff for Mom to eeeewwww and aaaahhhhh over - we found daffodils in flowers - there were hundreds of them - just growing wild out in the middle of nowhere. And then finally we were back at the beginning of the Great Blue Heron Trail. Yes - we did the whole 1.2 miles - probably more considering we kept dragging Mom down little side trails as we followed our noses. Mom says that she was sad that she could see the lake between the trees but there was no way to get to it. For some reason Mom loves being near water and doesn't understand this concept of people 'owning' lake shores. 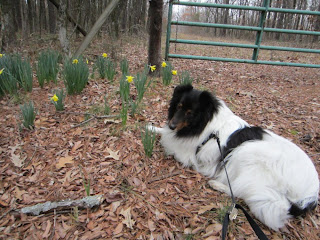 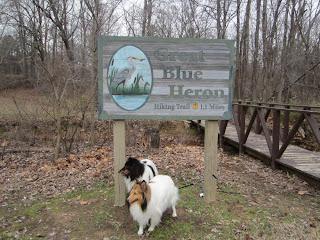 Oh we nearly forgot to mention - on the way home - we saw not 1 but 2 REAL LIVE deer - just around the corner from where we live !!! It's only the second time she has seen them in the wild like that. Luckily Mom saw it off to the side and stopped the car as it bounded right in front of us - quickly followed by the second one. We tried telling Mom to give it a nudge with the car (to just hurry it along a little) but she said no - hey you can't blame us for trying - we do love a good bit on venison.

Posted by Cowspotdog at 2:58 PM