Yesterday we were actually lucky enough to see the USS Vicksburg heading out for deployment - it's home base is right here at the Mayport. As soon as we got home Mom instantly went online to find out more about it and here is what she discovered.

This is actually the second ship to have this name - the first Vicksburg sailed during WWII. The ship which was built in 1991 and has a crew of nearly 400. It was originally to be named the Port Royal but was changed to USS Vicksburg before it was commissioned. (Mom gave a HUGE sigh of relief when she read that as you may not know this but sailors consider it VERY bad luck to rename a boat after it has been launched).

The USS Vicksburg (CG-69) is a Ticonderoga-class guided missile cruiser.  She is named for both the land Battle of Vicksburg fought during the American Civil War, and the city of Vicksburg, MS.

This ship along with 11 others in its class were meant to be decommissioned in 2013 thanks to government cutbacks to the Defense Department (each ship cost $1 BILLION to build which also means they mothballed $9 Billion worth of ships) but the Vicksburg and 2 others were thankfully saved. You can read more about that here.  This ship was also featured predominantly in a movie called "Fire of the Raging Dragon" which was released in 2012. 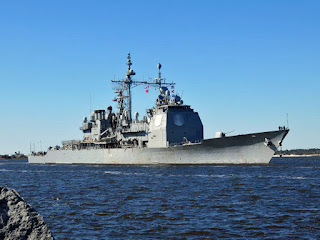 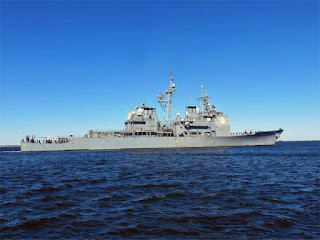