Had to rush Reilly to the vets

(Mom) - I popped out to pick some groceries this morning - was out for about an hour and when I came home I noticed Reilly's face on the right side was swollen. I rang the vets and got an appointment for this afternoon but half an hour later it was even more swollen he was shaking his head a lot so I called back and they said bring him right down. They checked him out and it is an abscess caused by one of his back teeth. He had an antibiotic shot and has more antibiotic tablets and pain pills to take. He is scheduled for next week to go have the tooth removed and have the rest checked.  It really scared me how quickly it swelled up - I thought maybe he had stung by something - especially after the tick scare we had. It just added to the stress of me waking up at 1.30 am this morning with an itchy arm only to find it was tick causing it! It had bitten me! Thankfully I had just read up on how to remove them and Dave was able to get it off with no problems. Both Dave and I had a restless rest of the night though - we both kept feeling like there were things crawling on us!!!!! It's going to be one of those weeks! 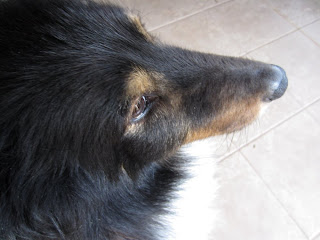 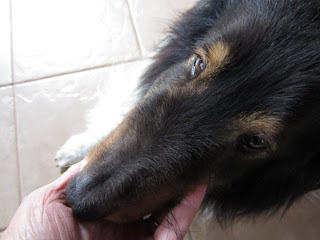 Posted by Cowspotdog at 1:41 PM