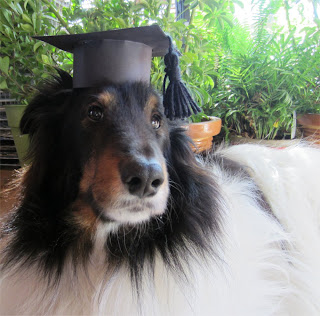 Some Dweeb doggie who shall remain nameless DWEEB ! chewed up my cute little professor hat - can you believe that!  Personally I think he is extremely jealous of my suave good looks while wearing it and that it won't fit his dweeb little head. Mom is making a new one though so all is okay. 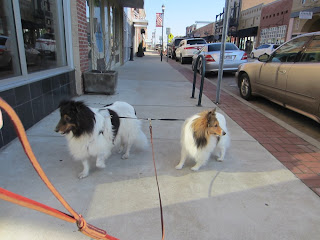 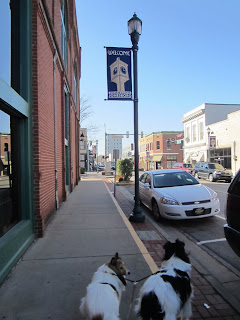 This morning we went somewhere we have never been before - to the "downtown". I must admit it was a place none of liked - not even Mom. WE didn't like it because there really wasn't anything to sniff, it was noisy and there was a lot of traffic. Mom didn't like it because even though the speed limit is only 25 mph - there was A LOT of cars who seemed to think it was their was personal drag strip! Our downtown is also made up of weird one way streets which tends to confuse Mom as they are really not well signed or you are right on top of the sign before you see it. But Mom decided DWEEB needs a bit more exposure to new things so off we went.

Like many downtown areas of small cities - it has seen better days although they are trying to improve ours. There is mainly just restaurants and bars there at the moments which Mom thinks is silly because there is hardly any parking. They definitely need to do something to "green" the streets to - it would help reduce the noise issue and just make it look better. Probably half the stores in the downtown are empty and mom wonders why they don't encourage art galleries or such to open. One weird thing we did see in a window was a stuffed monkey!!!  It was pretty old and gross and the store was empty - just this poor fellow sitting in the window. Mom tried to get a picture but it was too dark. One has to ponder why someone would have a stuffed Monkey in the window - especially as the sign above the door showed it use to be an Italian Restaurant at one point of time!