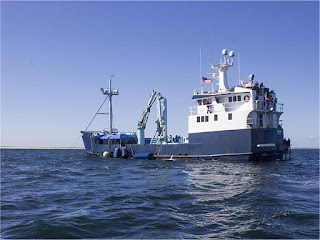 Remember the other day we showed you the Ocearch - a research vessel that tracks and tags shark. Well yesterday and today they were back right there off MY beach and guess what - yesterday they caught and tagged a tiger shark who they have named Viper and today they caught and tagged another tiger shark that they called Duval. They have also received a report from local fisherman that there is a great white nearby so have been hoping to catch and tag it - but so far it is proving to be pretty illusive. I think they should call it Reilly is they do catch it :)

Now personally we have no idea why there would be ANY sharks in the area as it is SOOOOOO noisy out on the waves at the moment. Why you ask ? Well  there we were enjoying a nice stroll along the beach when "BOOM' it sounded like a big clap of thunder - which was odd as the skies were all bright blue and there wasn't a cloud to be seen. We continued on and "BOOM again ...followed by another "BOOM" and then even more "BOOMS" Even the Mom stopped at looked and it was then she noticed all the Navy ships on the horizon. We are guessing they are doing some target practicing or something.

Oh my dog - a bomb right there in MY beach!  I must admit I had to sit and scratch my ears and head at his one - as it could only be described as one "teeny tiny little bomb". Personally I think it is those Dwarf Druids are at play again but Dweeb of coarse was convinced it was unexploded ordinance and we were going to be blown up at any second - needless to say we weren't :) 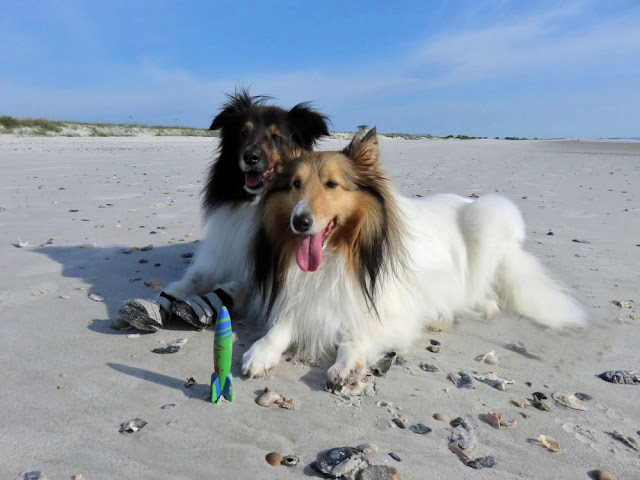