Now you all know that mom is a bit snap happy with the camera and she will often take lots and lots of photos to get just the 'right' shot as she calls it. Well here are some of the other photos she took yesterday. The first photo is of Franklin - mom told him to say 'cheese' as in 'smile' not knowing that Franklin's most favorite treat in the whole world is cheese and of coarse as soon as he heard that word he just started licking his lips thinking of all that yummy goodness. Doesn't Franklin have the most beautiful big brown eyes and big fluffy ears.....woofie chuckles..... and the smallest little legs? Mom say Corgi's are herding dogs just like me and that in Wales, were they come from, they herd cattle. The thought of Franklin chasing cows......on those stumpy little legs, cracks me up. 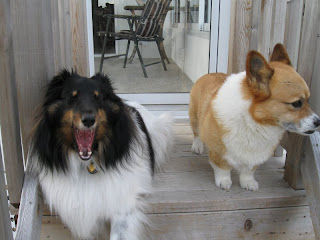 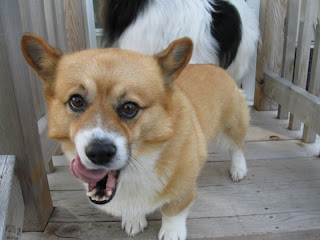 So in the the next photo when mom said smile, I was thinking of Franklin chasing Cow Spot Cows and it made me give her the biggest smile ever.....so big you can almost see what I had for breakfast was down there in my tummy! Mom also says that Corgi's are very well known over in England because some lady called the Queen has a lot of them and has made them very popular. Mom also says there are two different types of corgi's. There is the Welsh Corgi (and that is what Franklin is - he has no tail) and then there is the Pembroke Corgi that does have a tail. And there I was thinking that a tail monster has bitten off Franklin's tail...when all the time he was born without one.
The last photo is just of Franklin......and shows those beautiful big eyes. I must admit I am very envious of his ears. They stand up so straight and look so nice. Much better then my sad floppy 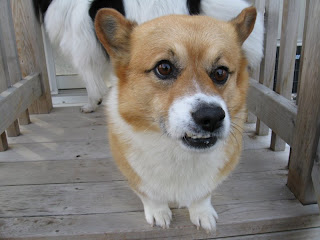 down ones. Did I mention that Franklin only lives 2 houses away and that even when I am not visiting we can still see each. I bark big happy woofs to say hello....and Franklin comes and stands at the fence. Do you know, in the year and a half I have known Franklin, I have NEVER heard him bark - not even a little woof! Franklin's mom says she has only ever heard him bark twice in the three years she has had him and one of those times was when there was a prowler around the house and Franklin told him off good and proper! Wow....can you imagine being SOOOOOO quiet. I am sure many moms and dads out there would be happy with that....but not me, I LOVE to bark! Time for my run on the treadmill.....have a happy woofitty day everyone.
Posted by Cowspotdog at 9:16 AM