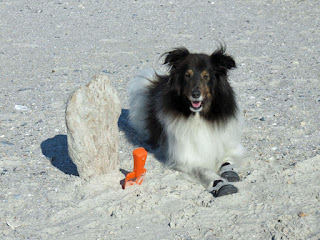 So there we were doing a little more sleuthing today because we are Internationally Renowned Consultant Detectives after all and the "Case of the Disappearing Sand" has yet to be solved. We were busy following some unusual tracks when we came across this ----->>

Denny Watson then asked " but who could be building it and why?"

"Well that is elementary dear Watson.... it is Dwarf Druids because only Dwarf Druids would built something so small - and look they even left one of their digging apparatuses." "I do believe Denny Watson that they may have something to do with MY missing sand - it is probably some pagan moon ritual in which they worship MY sand!"

Denny Watson just shook his head and wondered to himself if Reilly Holmes had been sneaking sips of Mom's dragonfruit juice again! "I think we need to investigate this clue some more Reilly Holmes" Denny Watson finally said.

Reilly Holmes grumbled a bit but decided that we should continue on our walk.... that was until he spied a small ship just off HIS beach. We had noticed it for the last couple of days and we were wondering why it was just moored there  - was it in cahoots with the sand thieves? 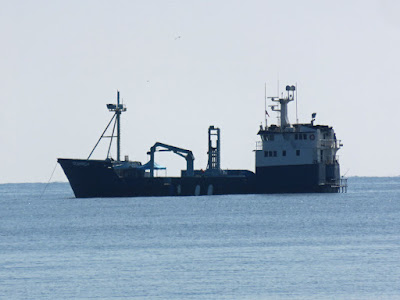 It had some big old cranes on it, odd looking platforms and looked mighty suspicious. Today Mom was finally able to get a photo of it so we could see the name and it turns out this the Ocearch boat and what may you ask is the Ocearch boat - It is a SHARK tracking vessel. They capture great white sharks, measure them, take blood samples and tag them - all within 15 minutes and then they released. They have a cool web site and phone app that lets you track the sharks that have been tagged. It turns out we have our own very special great white shark named Lydia who is 14 feet long. She was caught for the first time last year right here at Jacksonville (makes us even more glad we don't like the water :)

You can read about what they do here and then here is where you can track the sharks and see where they are - yikes there are actually two tagged ones right off our coast at this very moment!

Reilly Holmes sighed and looked out across the water - trying to link all these clues together, empty container ships, sand pipers, someone switching shell grit for sand, hidden lairs and tanks that aren't tanks and now a shark boat. Pondering was making his head hurt so he decided to go chase a seagull to relieve the tension :) Will he EVER solve this mystery?