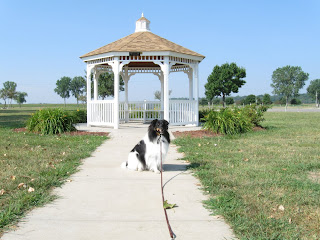 Mom was feeling better today so I took her for a walk down by the Missouri River. Along its banks is the Lewis and Clark Park. Mom says they were the guys who mapped this area.....I am not sure what that means but I sure do like their park. Mom had me on my long lead today which I really like because I can run and sniff, but she also had that horrible halti thing on my nose which I DON'T LIKE. We use that when her hands are sore because I don't pull when I am wearing that. We started off our walk at the Gazebo thing (that is what mom calls them) and as you can see it is a beautiful day with clear blue skies. Mom was a little disappointed that the park is not in good condition, the grass was over grown and not very green and yet last year every time she went it was so pretty and well kept. Anyway, after I stopped there and had a good sniff around we went on the two mile loop. 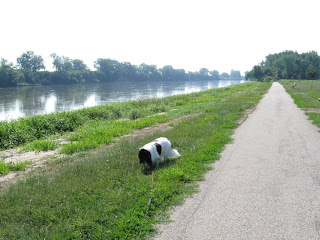 This path follows the river and it is nice walking along there. We saw lots of holes in the ground and mom wondered if they were moles or something else. I sniffed at them but didn't like the smell, it made me sneeze. The river was moving very very fast so mom wouldn't let me get to close to it ....as if she needed to worry....it is water and water is wet and I don't like wet! We saw some big branches floating by and I barked and barked at one because there was a goose sitting on it! Mom wondered why people would take their boats on the river as there is a lot of debris in the water. (As we dogs already know, people are not always the smartest cookies in the box). We continued on and it was starting to get quite warm. 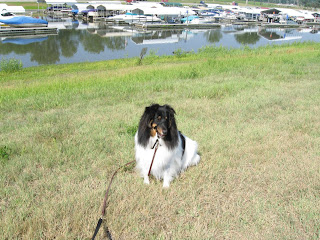 We stopped to check out the boats in the dock area and I got to bark at some more geese. I don't know why I like to bark at geese but I do........and I have this overwhelming urge to go and herd them, but I am a sheep dog not a goose dog, so that just wouldn't be right! These were noisy geese too, the honked and hissed at me. Mom said it was because they were protecting their babies. I just barked louder at them after that because I ALWAYS have to have the last word. Mom sat for a while on a bench and I jumped up next to her and we just watched the geese and the boats. I even sat quietly when two joggers went by, mom was very proud of me for that. I was starting to get very warm so we decided to head back to the car. 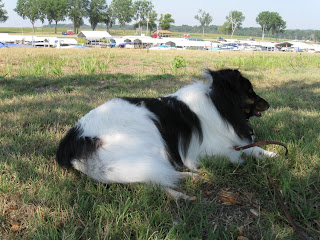 When we got there mom got my bowl out and filled it with water and I had a big big drink, then I flopped down in the shade to have a rest. I really wanted to keep walking and the other side of the trail is all under big trees and shady but mom remembered the nasty prickles that got stuck in my paws the last time we went that direction so we decided that was probably enough for today. I am all rested now from my walk so mom and I are going to practice some agility. Hope everyone has as good a day as I have had.
Woof woof

PS: I hope Ricky is feeling better today
Posted by Cowspotdog at 12:30 PM