The power of chocolate 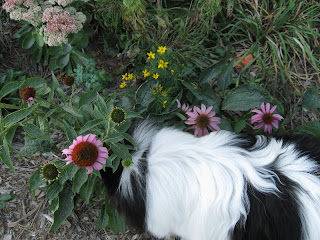 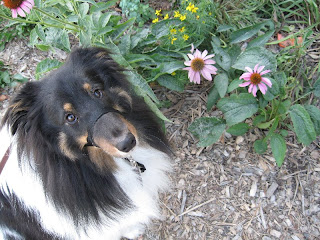 Mom had a couple pieces of chocolate last night and this morning was full of energy !!! (Of coarse I wasn't allowed any as chocolate is not good for doggies....even though it smells sooooooo good. ) Anyway, it was nice and cool so off we went on a nice long walk and mom said she was feeling so much better. First off we checked out some flowers that were growing along the path. They smelt kind of funny to me and made me sneeze four times in a row. I looked up at mom and asked her "what was that all about - why did they make me sneeze like that?" Mom said it was the pollen.....I have no idea what that is but I don't think I like it very much. We continued out walk and one of the best things about where we live is that we are right on the edge of our city and there is nothing but rolling green fields of farmland and trees. 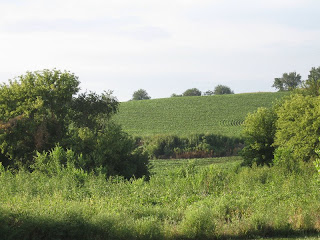 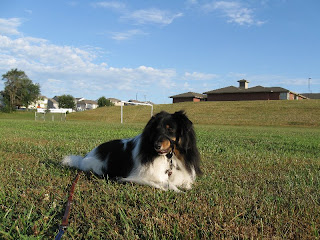 So we walked and walked and I sniffed and snuffled and checked out every tree. I even scared a bunny from its hiding spot and that was fun because then I got to bark at it. Eventually we followed the path around the back of the school and behind the soccer field. Mom said I am the coloring of a soccer ball so she thought it was fun to get a picture of me there. I also have a big fluffy soccer ball toy that would be so much fun to bring down onto this field to play with. Mom said we might bring it with us next time. We continued on our walk and I got a nice compliment from some ladies walking by, they said I was such a pretty dog and so well trained. Mom has told me ever since I was little pupster that I should always stop at sit when we come to a road and I always do this because mom knows best about roads and cars. We made it home and I had the biggest drink and mom made my breakfast which I had worked up a real appetite for. And that is my day so far.......and there more adventures to come. I am such a lucky Reilly!
Woofitty woof!
Posted by Cowspotdog at 9:47 AM